Waking up and moving my feet

I hate walking here, to this horrible place surrounded by an illuminating beauty. All the green was illuminated by the snow’s negative space.  People always say never judge a book by its cover. Never thought that would be literal but what the fuck do I know. My walk starts off strong. Music blasting in my ears and the smell of cheap instant coffee seeding in my respective senses. For the first ten minutes of the day, everything is a breeze. Then the smog creeps in. The screaming of bloody murder, the pretentiousness oozing out of the generic hipsters, and who could forget the police stops every now and then.  Smoking weed on the way there only drowns out so much. I see businesses boarded up and a sky of cigarette smoke. While I’m walking past the delirium strip clubs, I wonder how individual workers even make money. I should ask my friends who dance for extra cash. Then of course, after the strip clubs, you see the jungle gyms and the slides. Kids playing and the soothing summer sounds of the ice cream truck. There are all these stores around, but nothing to buy. Knick knacks and definitely not the cool kind. At least the book stores are nice, kind of the safe zone of the city. A place where you can just get lost in the dust of the massive shelves. I’m almost to school and my high is wearing off. Never what I want to happen on these walks.

I walk into the building and escape the pitifully warm winter. At least it’s warmer than I’m used to but it looks like a crashed spaceship or a giant Pontiac Aztek. An architectural cluster fuck of massive proportions. It looks like the inside of one of my psycho classmates’ brains (not sure about this simile). I’m inside now and I walk up and up the crooked and strangely artistic stairways. I guess I like the inside more than the outside. The sound of various types of boots behind me. Almost as if they’re chasing me down. I’ve been chased down before so I get paranoid. I’m ending up like the stairs. The classroom looks like it’s made of glass, and it’s my sanity that’s breaking. Things start to look like a house of mirrors. I’m compelled to walk in, or else this would be wasting thousands. I try to open the door and not get noticed, but silly me. I stand out like a light-skinned thumb. It’s February, the worst month of the year in Portland. The month where people either hate me or want to save me from a system to which they contribute. It doesn’t get bad like the classroom, though. A surprise to most I’m sure. Usually, education is a safe haven for creativity but all I hear is stupidity. We’re reading over Langston Hughes’s poems, oh boy how new to me. It’s always the same poems too.  What else isn’t new is being called out of the crowd of white faces. “Do you have an opinion about this piece?” I spew the same literary pretentious answer every year. “The dashes in the poem represent issues that never end.” I hear good job and all that. I used to think that answer was good, but it’s the same as what the racists say. Some of the awful comments stand out. “Wow, they’re really just like us.” When it reaches that point or “If I can’t say it then no one can”, I screech my seat on the ground like I’m chipping it away and walk away.

My long walk home starts again, or at least it always feels long. I rolled a Dutch before I walked to this hellscape. Thank the lord my walks back are better. It’s the opposite of my initial trek into madness. I can’t see all the bullshit with my eyes bloodshot red thankfully. One of the benefits of living in the green beautiful state of Oregon. Where all the issues bubble beneath the surface like a fourth-degree burn. I walk in a haze of smoke from lit garbage cans and the sound of blood beneath my feet. I’m startled by it, I didn’t notice with my music blasting out the earbuds. I look to my right in a dark and filthy corner. It smells like month-old piss and corpses. I see a man who’s at the end of the short trail beneath my feet. I push him and ask “are you okay?” He isn’t moving and I’m panicking. I turn the man over—he’s got a needle in his arm and blood running fast from his veins. He opens his eyes and yells at me, “Get away from me nigger.” I call him a cocksucker or something along those lines and walk back through the madness. After a peaceful ride on public transportation, I get to the bar down the block from my apartment. They know me there, I’m in quite often. I usually am here for research to create new characters, but February is different. I’m here for a drink or more likely a disgusting slew of them. On some of the nights, I meet a girl. One-night stands are common in February but they don’t turn out well. I take her back home, we both have fun. We smoke some weed after and all is well. I always speak too soon. I wish it ended there because the next thing she says always ruins it. “I haven’t fucked a black guy before.” 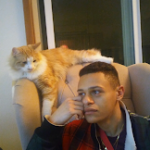 Jeremy Husserl is a Writer and Art Curator from Chicago, Illinois. He has had various published pieces and has been in the Portland Mercury for his art show, “When is a Bowl of Fruit Just a Bowl of Fruit.” He currently lives in Portland Oregon, where he spends his time running his gallery Cosmic 211 and attends Portland State University.