It is filthy but imagines itself to be clean, it will be clean, it is made of stone, it has no cracks down which crumbs, it is dirty, it is filthy, it is a foul place, but if you say it is a heaven

it will not come out, it is damned, but imagine it is soft, loved, wanted, birthed, it is terminal,   like a terminal bud, which means it is green, it is responsible for new growth, wouldn’t that be

lovely, even though it is ugly, infected, sickening, quiet, it a painting of something ugly
and that makes it pretty enough, it was imagined to be pretty one day, it has grown on you,

it has grown on us, it is growing, choking, but we can breathe, there is always room for breath,   it will breathe again, it will climb softly over you in the night, while you are dreaming,

it will be holy when you think it to be holy, a moral, it will come to you in a story,
a library book, it is closed now, cut off, blackened, it is charred, but imagine it to return

unburned, fattened, it is asking to be eaten, it is begging to be thought, it is begging, it is poor, impoverished, desperate, it almost killed itself but it imagined itself to keep living and it lives

Bricking Up the Windows

Laced into the afternoon
a repurposed belle
dress that keeps
everyone at a long
distance, I keep running
into the walls, locked
inside my gemstone
that cuts the daylight
into twenty-four
small bites
to be counted
until it is time
for the next bite.
It is time!
I am so unfull.
The train passing
becomes the bell
reminding me
that my suffering
is when pleasure
is missing
my pain level
is the face
drawn with a line
for a mouth,
the line is the sign
for taking things
away but that is just
the way I smile.
That line on that face
———–is my smile.

Lilacs in a Vase

Oh to be shoved in a crystal vase
to be contained in glass, to be the glass
holding the water, nothing swimming,
no fish in the bowl of my forehead,
to have no lilacs in my head for a minute,
no thoughts, there are never no thoughts,
says my baseball cap, says the cross-stitching
of my throw pillow, maybe then to have
only three thoughts and for one of them
not to be lilacs, to have a thought given
to you on a Saturday night when you’re
having a gay time on your couch with your
colored screens lit up like paintings
in a museum that you were roaming
so happily without that one thought
the one you didn’t want to think
but there is came, like a flash
in the pan of your head, unlucky,
fool’s thought, and you went for it,
you held it up to the light, little kernel,
little goldfish gasping, and you swallowed it
whole, live, anyway, you thought it,
you let it be thought, you let it be true,
because it was true, to begin with at least,
it was a truth that you devoured
like a hungry ghost, like a binging
woman, touch starved, grabby, perverted
even, how you stood in the corner
of your cupboard and downed all of your
thoughts, if I can do anything you said,
I can do what I have always done,
down all the golden yellow liquids,
down the dish soap, down the rust water,
down this Saturday evening thought
and delay the truth of it until Monday morning,
before the sunrise, waking in the dark,
dreams not allowed to dry, pulling out
the scale, weighing what you weigh
with this new truth inside, the scale
will hold, the scale will not buckle, the scale
will not run out of scales, of numbers,
the scale is just one scale on the sunfish
you swim with in this body of water
contained in a bungalow with sky leaning
into the windows to remind you of
something cleared of its storms
of its clouds as though nothing had ever
happened and nothing were ever really true 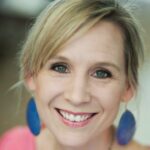 Elizabeth Hughey is the author of Sunday Houses the Sunday House (University of Iowa Press), Guest Host (National Poetry Review Press) and White Bull (forthcoming from Sarabande Books). She is a co-founder of the Desert Island Supply Co. (DISCO), a literary arts center in Birmingham, where she teaches poetry in the public schools.