And what might my children’s children say
about their old board books and blocks
crammed full of catastrophic loss?
I never missed the dodo or eastern hare-wallaby
so why should they fret about unseen tree frogs
or mountain gorillas? Perhaps going is only gone
if you’ve heard honey bees praise an almond grove
or sailed the sloop of an Indian elephant’s back.
What if they flip past the Javan rhino and the killer whale
because they’d rather shiver when I roar like a lion?
I’ll tell them lovestruck manatees sighed at the moon,
that dentists once knew how to treat
a narwhal’s toothache, and if they don’t notice
my sorrow over the orangutan, or believe
passenger pigeons flew in rivers across the sky,
then at least we’ll question together what the quokka
ate for dinner. There really was a big bad red wolf,
until there wasn’t. And some sea turtles
long outlived the dinosaurs, until they didn’t.
Maybe the tiger with its simmering rage
will do what the umbrella bird or vaquita somehow can’t:
speak to them from the dead, explain alongside
the whooping crane and wooly mammoth
what it means to be hunted until ex,
and why not even a zebra is left at the zoo. 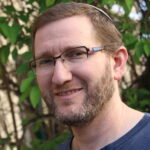 Yoni Hammer-Kossoy’s poetry appears in numerous journals and anthologies, including most recently Lily Poetry Review, Juniper Poetry, Sky Island Journal and River Heron Review. Originally from the US, Yoni has lived in Israel with his family for the last twenty years.