According to Greek mythology, humans were originally created with four arms, four legs and a head with two faces. Fearing their power, Zeus split them into two separate parts, condemning them to spend their lives in search of their other halves.

if an avocado yields
to my grip: it is ready
to be pierced with this butterfly
knife through bark:
sever a berry in two

am I boring you?

beheading all but the throat
blade smack
a wooden seed:
rotate to unlock

before a kiss
a turn is tilting
chaos into the body

an alligator pear
lies flat on its stomach:
cut into quadrants

we too are designed to be halved
–chewing on symmetrical doubts

do you wish I shut up now?

dissection is only peeling
off another wrinkled mask

where moss green hides below a hide
when ripe: the skin doesn’t cling

are you beautiful yet?

gravity alone can cut a naked fruit:
just rest a knife atop

Cyclones of farmed salmon
anchored to the Johnstone Strait

I too sicken,
shit, sore, tumor, deform:
migrate in a tank

Chinookan peoples
of the Pacific Northwest remain
unrecognized, without a reservation
scattered through Oregon towns
no line of their own to cross

known as “Flatheads” by early explorers,
Chinookan elite bound their infants’
heads while the skull was soft

the heads wedged
like a salmon’s from the side

a current is shaping our borders
our instinct to spawn upstream
the river stills when it flows
both ways. 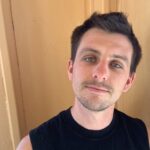 Cole Depuy’s poetry is forthcoming or has appeared in The Penn Review, The Paterson Literary Review, The Maynard, The West Trade Review, and elsewhere. He is a Ph.D. student at SUNY Binghamton, winner of the Negative Capability Press Spring 2020 Poetry Contest, and recipient of the Provost’s Doctoral Summer Fellowship.