I recognize her voice,
the forecaster’s daughter.
She wanted to become a singer,
her mother listened to lavender grazing
the headstone on Soldiers’ Hill.
Her father peacefully lay atop its lilies.

How she would stand on the steps
carrying a pile of Inquirer newspapers,
I’ll be done in an hour she’d say.

Soon, EDSA would be void of trucks,
women in white tunics form parallel lines,
holding a basket of poppies and tulips,
to carpet the roads for tanks. Instead,

children occupied the roads in white tank tops,
holding onto their mothers’ skirts. At times,
we saw boys in cargo shorts, rifles jutting out
like minarets through their arms.

We would peek through spaces
between the window and its curtain,
counting the familiar faces in each truck. 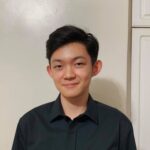 Jaewon Chang is a high school junior living in the Philippines. His works of poetry is published or forthcoming in journals such as Cleaver Magazine, Polyphony lit, Eunoia Review, and more. During his free time, Jaewon enjoys traveling the city on foot!