That Which We Are

We bought space in a van on Saint-Louis Island just below the Mauritanian border. The driver, a tall Toucouleur man with black etched marks on his temples, told us to join them. At one point on the all-day trip east to the village of Matam, across the river region of Senegal, our van driver pulled over to sell us to another driver. They negotiated beneath the hood of the van while we sat in the dust of the worn-out road, its edges chewed by age and wind, some portions completely digested by drought, and we ate rice and drank warm water beneath the oppressive May sun.

We were sold quickly to the other driver and eventually we left. At dusk we pulled over again so this driver could break fast along with any others who so desired, and shortly later we continued on to our final stop where well after dark we trekked on foot to the village.

I was befriended by many in the small village, and through hand signs and a friend who spoke Pulaar, we communicated. Eventually the conversation moved toward history, toward colonialism, toward the west and slavery. I told them I was on Gorée Island a month earlier. It, along with Saint-Louis Island, where I had spent the night before catching the van east, had been holding areas for slaves during French rule from the 1600s through the 19th century, and even before then as ships moved back and forth to Lisbon. Saint-Louis in particular became the crossroads of all things West Africa. It was the gathering place for Europeans and Africans, Christians and Muslims, slaveholders and slaves. It was on a West African island like Saint Louis where Europe first stole the heart of West Africa, when Antonio Gonsalves brought Africans back to Portugal in the 1400s and began one of the longest sustained genocides in the history of humanity. It was simple enough to pit Africans against each other—supplying arms to one area, such as Mauritania, to capture another area, such as Senegal. It was in this way the European slave traders didn’t have to work much to gather their “property” and head back north, or, of course, west across the Middle Passage.

What remains, then, is a region raped of her strongest men, her most able women, her very future. What strength this continent must have had, and lost. And the infighting left in the wake has pits brother against brother. And one of the most notable residual effects is the animosity between Mauritanians and Senegalese. The selling of slaves, the stealing of souls, and the very theft of identity is the region’s regrettable mark in history.

It hasn’t changed much.

On the way back to Dakar I rode again in the back of a seven-seater van. I was the only non-African, the only English-speaking man, and we rolled quietly across the barren sub-Saharan desert. After introductions, no one spoke to anyone else and we stared ahead at the mirages of fresh water in the road. At midday three uniformed Mauritanians “patrolling” across their border stopped us in a much-too-barren spot and demanded we exit the van. Our driver seemed more unsettled than he had been. He tried to negotiate with them, but this was not a sale, this wasn’t routine. They pulled our bags from the roof. When they found mine, they pulled out my clothes, my camera and film, my medicines, a few items of some value, and they ordered us to stand with our heads against the van. They kept their guns ready.

Several of the passengers objected, and the driver tried to wrestle my bag back from one of the soldiers until the man pointed his gun at him, and the other two pointed theirs at us, and we all remained absolutely still and silent. I thought that if I were going to kill a van full of people there is nowhere else on the globe I’d find better suited than right here. These guys were good.

Everything slowed down. It was well over one hundred degrees out and the heavy air moved like a thicker version of itself. My eyes took in the action frame by frame, like a projector moving slow enough to see the breaks in the strips of film. The heat from the exhaust lifted into my face, my forehead pressed against the van’s open side door, and behind us the three men said nothing to each other but continued to rummage through our goods.

One of the men came and stood next to me and stared at the back of my neck. He just stood there, close enough for me to smell him, to feel his breathing on my back. I didn’t turn around and he went about his business when a tall, slender Senegalese man beside me whispered, “We must yield to these gentlemen.”

When I had first arrived in the village in the east, the chief, Besitio, looked like God; he was taller than most, well over six feet anyway, and dark, with long, thin, strong arms, and a white robe that wrapped down his legs. He was ancient and eternal. He was Achilles, he was Gandhi. He was Mohammad. Even when doing nothing at all, this man had complete determination about him.

“What is your purpose here?” he asked me in those first days. “Why are you here?”

“To see what’s out there; to meet you.” I said, and he nodded. “To have a look around,” I added as my friend Claire translated, and we laughed. “To see more stars. You have more stars than we do.” We laughed again and that night he poured tea in some beautiful and ritualistic way. I had traveled often, but never before had I felt so safe, so in touch with a group of people, and so welcomed. I didn’t stay long; I had to keep going, but I left with a complete sense of peace. I wondered what life here would have been like had the Europeans not decided for them what the future held. At the same time, I could not imagine a more genuine existence.

Now, a few weeks later, I was standing against the van while the three armed men rummaged through the bags. I wondered why we were still there. The driver had been pleading with these bandits to let us go, but they didn’t reply. It got quiet and I decided that if they were going to kill us they most likely would have by now; and anyway, they had what they wanted. To me their silence signified approval. I suggested we all just get in the van and leave, but at first only the driver agreed.

I looked at the tall man next to me. “Yield,” he had said. “To give over possession of, to give up, to surrender, to concede.” What an education history can be simply by practice. While history shows the ancestors of these people often fought with dignity and diligence to their death, so many of these people know little else except to yield. I turned to the three men and took one step in their direction, noticed their guns resting aimlessly on their laps as they shared my possessions, and I turned back and climbed in the van. By this time the van driver was behind the wheel and shifting into gear while the rest hesitantly boarded. We rode off. They never reached for the guns, they never looked up. They never cared.

We drove without talking for some time before he pulled over, and we all got out and breathed again. My stomach sat somewhere near the engine fan ready to be shredded, and one man in the back covered his mouth as if he might get sick.

The tall man asked me how I was.

“Ya Wur,” I said. At peace. He smiled. I laughed that loud growing sort of laughter one does that is a combination of nervous energy and complete relief. We just kept laughing. A boy ran up from his small nearby village to sell us juice but we explained we had no money.

His mother came and talked to the driver, then she left and returned with food and water. We drank tea and talked about where we had been in the east and what our business was west in Saint-Louis, or down in Dakar where I was headed, but none of us talked about the three men or the guns.

A few hours after we abandoned the bandits we arrived in Saint-Louis, and the next day I made it south to Dakar. I went to the Peace Corps center across from the Grand Mosque where my friend had let me store some things, and then it hit me; the guns, the idling van and the heat. My stolen belongings, my salvaged nerves; the crime that became Africa; the beauty and loss that defined half a millennium. I sat alone in a small room used as a library where the tall windows were open to let in the ocean breeze, and I rested, still shaking somewhat from the three men and their guns and how we climbed into the van waiting to hear gunshots. The others might have waited all day, I thought. It is their way, to wait, to follow the natural pace of each incident. Thinking too much about it made me shake violently, so I took a sip of tea and reached over my head for a book, any book, anything to focus on.

It was Tennyson. I opened at random to “Ulysses,” wherein Tennyson writes:

Though much is taken, much abides; and though
We are not now that strength which in the old days
Moved earth and heaven; that which we are, we are,
One equal-temper of heroic hearts,
Made weak by time and fate, but strong in will
To strive, to seek, to find, and not to yield. 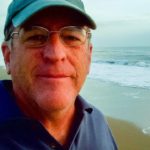 Bob Kunzinger‘s work has appeared in various publications such as the Washington Post, NY Times, WW2 History, Ilanot Review, Southern Humanities Review and more. Several of his essays have been noted by Best American Essays. He is at work on a new collection of essays about traveling with his son through Sibera and Spain.