Dictate to me, Dahlia

Translated from the Hebrew and adapted, with the author, by Lisa Katz

Dictate to me, Dahlia,
give me words, while
your garments
go up in flames before me.

Everything you willed me
has not worked,
sorry. I admit, I was known
as a poet who’d been shot. Completely
covered with blood,

I’m hemorrhaging, begging. Inadequate. Poor.
Wretched. The most
miserable one of all.

Yet in the end, Dahlia,
when you rise before me,
now, entirely on fire,

I am declared,
at this very moment,
a divine voice says,
no way: not an inheritor.

Blood seeps from me, Dahlia, seeps, and my situation
is grave. Spotted with blood, sprayed with it, splashed
by your words —
mutilated over the land mine,

nothing is left  in my heart
but a great envy,
yet at least

where you, cloaked in the mantle,
rise up in flames. 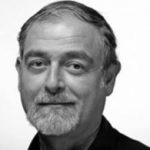 Admiel Kosman was born in Haifa and has lived in Germany since 2003. Author of nine books of poetry and the bilingual Hebrew-English selection, Approaching You in English, and four academic books on Talmud and Midrash, two of which have appeared in English: Men’s World and Gender and Dialogue in the Rabbinic Prism. A professor of religious studies at Potsdam University, Germany, and academic director of the Geiger Rabbinical Seminary in Berlin. Read an interview with Kosman here. 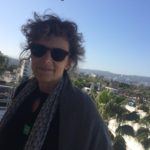 Lisa Katz was born in NY and has lived in Israel since 1983. Author of a chapbook, Are You With Me (Finishing Line Press, 2016) and the poetry book Shikhzur (Reconstruction, tr. into Hebrew, Am Oved, 2008). Editor of the Israeli pages of the Rotterdam-based Poetry International Web. Translator of Late Beauty (Tuvia Ruebner/w. S Bram), Approaching You in English (Admiel Kosman/w. S. Naim-Naor) and Look There (Agi Mishol). Katz served as a lecturer in literary translation at Hebrew University, where she received her doctorate, and is teaching at Ben Gurion University of the Negev in Spring 2017.