“an insatiable appetite for denim”

from the Seattle Police Department blotter

Now some may favor your gemstones and sparkle
or the plain old dollar bills in a nice big pile.
But Macy and me, we just can’t get enough
of the denim. Jeans, jackets, skirts, tote bags,
we like to see them hanging in the closet
like Union soldiers in a row. We don’t need
to wear it, just watch it, stroke it
sometimes, like the old yellow cat we had
all those years back who died by Chevy.
We’re modest folks and while we don’t
splurge on fancy food and such, we are a touch
short on extra in the cash department.
So, we got creative, which is what my grandpap said
you had to be to get by in this jigged-up world.
We give a little something to those people
on the street, waving their cardboard and needing
a hand. They wiggle their way
into those bargain stores, the ones with shelves of disarray
and a lot of scatter, all picked through twice or twenty times.
They find what we like and slip it out, smooth as soap.
We’re grateful and sometimes Macy offers them a muffin
or a lemon cookie if she baked that week.
We are collectors, don’t you know.
It’s real Americana, all sorts of stories
nested in the seams and round the buttons.
We hunt and gather, it’s what our DNA tells us to do.
Compelled by evolution. I don’t make this shit up.
It’s all on the Google. 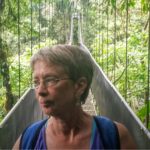