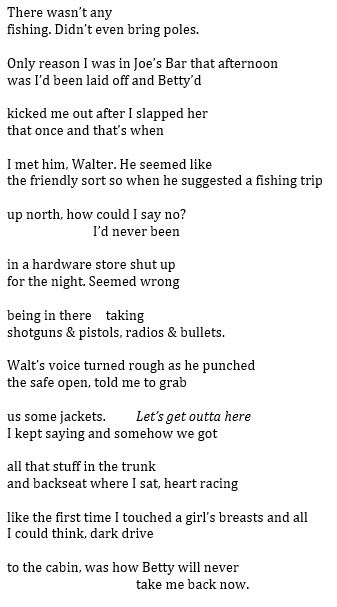 At the Family of Felons Convention
I mix it up: rustler,
heister, porch climber, clip,
prowler, scrounger, raider, sneak

to the question we all ask first—
what did your outlaw do?
Burglary, remarkable
in no way

my uncle’s 40 cases of whiskey from the Lake Wilson
Liquor Store, don’t begin to stack up.
The hushed pointing and deference
granted the keynoters—

the Unabomber’s brother, a cousin of Charles Manson,
the great grandson of Jesse James.
I sulk in a bathroom stall.
Why couldn’t mine have been badder, better

than a middling thief?
We fill a hotel ballroom to listen
to a niece of Charles Starkweather
in twitching need of a cigarette,

My whole life is knowing my uncle did this.
Girls at school calling her killer.
Being turned down for apartments and jobs.
The woman in K-Mart glaring at her newborn,

“you’ve got some nerve giving him
your last name.”
It’s in my face, it keeps getting brought up
and there’s nothing I can do. 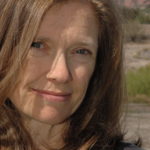 Kelly Nelson is the author of the chapbooks Rivers I Don’t Live By (Concrete Wolf, 2014) and Who Was I to Say I Was Alive (Minerva Rising, 2015), selected by contest judges Carol Levin and Heather McHugh. She is currently working on her first full-length manuscript, Crossing Thief River, a lyric biography of her uncle based on his 500-page prison record. She holds a Ph.D. in Anthropology from Brandeis University and teaches Interdisciplinary Studies at Arizona State University.