The paradox of Araromi

Is that everything plagued us.

Termites, snakes and armed robbers were

All loose on our lonely house in the woods.

One night the robbers came.

Hid us under a bed,

And opened the door.

From under the bed we could hear them,

From under the bed we could see them,

But speaking the same language.

They heard us whimper,

And one jumped on the bed-

Crashing down the furniture,

In the spirit of this real life action film,

Tayo said he pulled me out,

And we both remember vividly.

There are no witnesses,

We’d argue forever if we don’t find him.

Araromi is a Yoruba word that translates to ‘My body is resting ’, the name of a street in Akure. 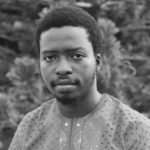 ore Orimoloye is a poet from Akure, Nigeria. His poems have appeared in The Kalahari Review, Best New African Poets Anthology and The Rising Phoenix Review. He was joint-winner of the Babishai Niwe Poetry Award in August, 2016. Moyosore is a Pharmacist at the Neuropsychiatric Hospital, Abeokuta.