Sonny wants to be a doctor. He wanted to be a garbageman, but that’s when he was four. He walks with a weight of four generations. He’s silent, but he slams the door. Sonny cradles a baby bird, brings home some turtles. He digs with a fervor and licks the knife slick with onion juice with open eye -green from the sun- and later beats the fruit. Sonny won’t hold your hand, but shoves it in a bucket of maggots and gives you a jewelry box filled with rocks and a broken lightbulb for Christmas. Sonny sleeps on just a towel at the tip of Dauphin Island, sees the oil rigs wink little trowels at him. He just picks his teeth with a blade and sips homemade moonshine. When Memere is crying Sonny says, “y’all clean your room.” When Memere’s second husband is booming down the driveway in a ‘78 Ford- used just for hunting- Sonny says, “y’all clean your room.” When Grandpere dies Sonny says, “why didn’t y’all tell me to be there?” and when his Parrain needs directions to Sonny’s New Orleans apartment, Sonny says, “Wild Turkey.” He loves a girl hard and she leaves him. He holds a string of lifeless ducks and he eats them. He grins with deer blood on his face and fillets you some snapper- makes red fish and grits. He says he’s a romantic. Sonny wants a happy mother. He calls her weekly. Sonny bumbles on the phone to his sisters, might be moody when you visit. He says ‘fuck’ at Memere’s third wedding when mumbling with a  longtime family friend. Sonny loves whiskey and warm weather. He goes to Brazil, to Italy, to Chile, to Birmingham. He takes the horizon like a full moon. Tells Memere of the leaves and trees. But back in Dixie Sonny’s hoarse, tells you of kicking ices and sickness. He makes you crylaughing when you’re young, helps you tape your sister into a fake christmas tree’s box and with a broom- as it’s raining- y’all slide her down the front steps into the suburban front yard. A magnolia tree on her left, a dogwood to the right. Your mother had all the pines removed from the yard, “cuz the needles,” she says, but you know the real reason, even if Sonny says it isn’t. Sonny moves away to yankee country. Thrives in the snow like a hermit crab in sand or a heron on land. Made of sinew stock, bamboo’s insistence- Sonny carves little proofs to himself, to people in graves, to Memere. Whittling with a dull, rusted knife Sonny wakes in the night with a silent dream- tells no one.

in my mother’s throat there is a rainstorm

for every ounce of sun

this mother of mine does not swim upstream

does not battle rising silt for a seat

of malnourished land and water

she was born there

she sucks up silt

into taffeta sackets and totes them home

to the needle palms she passes

this mother of mine spreads

my mother a lily

pushing butter up the sides of the coast

we waddle down the shore

crystal dust in our bellies

the nightseasons of our growth

creeping among cordgrass for

our blooming our sprouting

so that even what we propagate

gets silt grit in their teeth

in the sheen of their new leaves

a contrition while tide rises

she slathers sunscreen on my back

when she looks a man in the face

before showing her jowls her fangs

the calloused underside of her hands

whatever glitter falls with my mother’s rainstorm

illuminates some black mouth cur of her gut

the growls she gifted us

after our father’s funeral

my mother my memere raising kings on silt

ignoring brackish water creeping up the back steps

the sun still out

my mother my memere 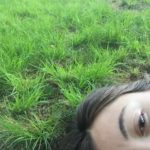 Haley Hemenway Sledge is from the Gulf South, but currently lives in Harlem. She received her BA in Religious Studies and Southern Studies from Loyola University New Orleans and her MFA from The New School. She is the Editor-in-Chief of LIT Magazine. Her writing can be found in Revisions, Nola Defender, Black Sun Lit, Vestiges, The Atlas Review, and elsewhere.