It wasn’t raining the day I got the umbrella. The sun was shooting death rays, in fact, sunscreen-piercing UV or whatever, and I was standing in my pajamas at the empty kitchen sink staring out the window at the brown-tipped, overgrown grass in our front yard. I’d been standing there a while when I saw my next-door neighbor, Mieko Tanaka, getting in her car in full Mieko body-armor: long sleeves and one of those hats with the green visor like a welder’s mask that goes all the way down over her smooth white face, making her look like an alien bookie.

Mieko is around my age but I think of her as older. She has three children, all headed to MIT or someplace similar, and a husband who works late hours and often travels to Japan, but always comes home to her. Her front walkway is flanked by lush, fragrant jasmine and roses, shaped and nurtured by her husband, Hiro, whose name is pronounced with a rolled “r,” but I always forget to do it. Next door is our house, wild with untrimmed bushes, bereft of children, and still filled with my husband’s things: his gardening gloves and tools, the lame painting of the ocean view off the terrace of Casita, our favorite brunch spot, which he made in art class at the Wellness Center, and so on. He used to come home every night too.

Mieko brought over food after the funeral, sans crazy hat. She had each of her perfect children write me a condolence card. Your husband was always so nice, they said, like all the cards I got: nice, smart, funny—all the banal adjectives you can think of when you don’t know what to say about a man dying at thirty-six, disintegrated by melanoma he didn’t even know to check for.

I threw the cards from the Tanakas in a box because I never wanted to see them again but I also thought it might be bad juju or whatever to throw them away. The food, of course, is long gone, most of it in the trash. The parents are gone too, though they offered to stay. They’d been there long enough, I thought, all four of them, alternately hovering and crying. I had grown hermetic with them there—curled up like a sea snail, silent and plodding.

After Mieko took off in her car I stayed at the sink for a while, watching the grass die. When the sun began its attack on the kitchen window I moved. I got dressed and packed as many of my husband’s clothes as our largest suitcase would hold and put it in the trunk of the car.

I went to my dermatology appointment. I already have too many freckles; there’s no going back, the dermatologist told me, but we can “minimize” further damage with lasers or whatever and lots of sunscreen and protective clothing.

“What else?” I said, taking out the notebook and pen I’d brought.

The doctor looked at me quizzically. “Well, make sure that if you go in the water you reapply the sunscreen. Or if you sweat a lot.”

Reapply sunscreen every half hour, I wrote.

“Uh,” she said. “Did I say wear protective clothing whenever you can?”

She shrugged. “That’s pretty much all I’ve got.”

I looked up at her.

“There’s really no need to panic,” she said, smiling in what I’m sure she thought was a sympathetic way.

I wrote: Find a new dermatologist.

From the doctor’s office I drove to the Goodwill shop downtown and gave them the suitcase with my husband’s clothes. They take everything, apparently, without even looking.

I didn’t want to leave. I turned to browse the shop and there were Mieko and Hiro, just coming in. Goodwill was not the sort of place I pictured them shopping, with its scuffed shoes and chipped vases and irons with old-fashioned, fabric-covered cords. When my husband was ill, Mieko invited me over for tea once—a small diversion, she said in her tiny, accented voice—and I sat with her in her kitchen. The counters were empty and their granite surfaces gleamed. The tea was pale but intensely flavored. A single white flower in a blue bud vase stood on the kitchen table. Everything was so clean and light and empty it seemed as if the Tanakas had just moved in, though they had lived there longer than I had.

If Mieko and Hiro saw me in the shop, they didn’t acknowledge me. It probably would have been awkward; Mieko had told me that except for an old family dog, no one in their life had died before. She said “life,” not “lives.” The children, she said, had never met a widow. Until she said that, it hadn’t occurred to me that I was a widow. Somehow I had thought there was an age minimum or whatever. I didn’t feel like a widow, a word that conjured up a fey and desiccated woman who had settled into a life of grandchildren visits and the feeding of cats. I simply felt—I don’t know—exposed.

They approached the counter, Hiro’s shoulder never quite touching Mieko’s as they moved together. I ducked behind a rack of coats and peeked through, breathing in the scent of old wool and sweaty perfume. Mieko’s sun hat was tied around her neck, hanging down her back like a plastic mini-cape. Hiro was talking softly in Japanese.

Mieko spoke to the clerk behind the counter. She usually did most of the talking, as Hiro’s English skills were spotty. “We were walking by the shop the other day,” she said to the clerk, a bearded young man with those enormous earrings that make holes as big as quarters in your ears, “and we saw a huge umbrella in the window. It was purple. Very big.” She opened her arms wide to demonstrate.

“Huh?” the youth at the counter said. He was frowning—not frustrated, but clearly confused.

“It’s a Japanese word,” Mieko explained. “Aiaigasa. It means two people walking together under an umbrella.”

The clerk blew out an audible breath. “No it does not,” he said in that way that means are you shitting me? He laughed. “That,” he said, “is totally dope.”

Hiro grinned. He put his hand on Mieko’s upper arm. Not only did this seem to me to be a very un-Japanese thing to do, it seemed out of character for the reticent Hiro. But then again, I hardly knew him—it was Mieko I greeted over the hedge between our houses, Mieko who picked up our mail for us when we had to stay overnight in the hospital, Mieko who made her children greet my husband in those last weeks when he sat on our front porch with a blanket over his knees. I had seen Hiro maybe a dozen times in the two years we’d lived in our house. Still, this demonstrative public gesture seemed to me to be an excessive and unnecessary act, like bragging.

“I just got back from vacation,” the clerk was telling them. “I haven’t seen any umbrellas. But you can check over there.” He pointed to the corner of the store farthest from the door, where a coat rack draped with scarves and hats stood, along with assorted lamps, and what looked like a pair of skis. “That’s where they’d probably be.”

I pushed aside a heavy black pea coat. By the time I stepped out, they had reached the corner but didn’t seem to be looking yet for an umbrella. Mieko had been distracted by the multi-colored scarves and Hiro was examining the skis. He said something that made her laugh. I stiffened.

When we first moved into our house I went next door to introduce myself. I had left my husband at home hanging pictures and opening boxes. He said we could go over at a later date, but I wanted to settle in as quickly as possible, to burrow down. Hiro and Mieko invited me in but I said I just had a minute. They called to their children and introduced them to me at the door, one at a time—two round-faced boys and the oldest, a teenaged girl. The children bowed. Won’t you have some tea, Mieko said, and Hiro smiled and said, Hai.  I have to go, I said. My husband is waiting for me to unpack. We should all have dinner together soon, I said. Mieko and Hiro nodded politely, if noncommittally.

My husband had just been diagnosed the week before. I didn’t want to leave. I wanted to step inside their house and inhale their life. When I got home I looked through our calendar for a date between chemos that would be good for dining out. My husband laughed at my haste, but it seemed important—vital even—to nail down a time to be with the Tanakas. Not long after, my husband was too sick to eat much of anything, and the dinner never happened. Then he died.

Mieko and Hiro had moved on to searching for the umbrella, voices low, his hand occasionally touching her back or shoulder, her laugh erupting at unexpected intervals. I stood in front of the smelly coats and watched them for a while, eyes stinging. My chest felt empty. It was as if all my organs had disappeared.

Finally I made myself turn away and head for the door. Just at the entrance to the shop, something caught my eye. On the floor under the display window to the left of the door, half-hidden under a shag throw rug, was the tip of an umbrella. I walked over and pulled it out. The umbrella was very big, and purple. I turned around and scanned the shop. The Tanakas’ smooth, untroubled backs were to me. The cashier was typing on his cell phone. It was clear that none of them would see me. I pressed the umbrella against my chest and hunched over it. My heart had started up again. I moved silently toward the door. The Tanakas were right. The umbrella was big enough for two people. For just one person, though, it would effectively block out everything. And it had a smooth wooden handle, curved, like an arm. 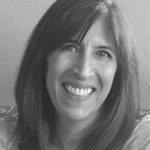 Susan Segal’s novel Aria was chosen in 2014 by Barnes and Noble for its Nook First: Compelling Reads From Emerging Writers feature. She has published short stories in Redbook, Juked, Snake Nation Review, The Bridge and other journals, and she has an MFA in fiction from UC Irvine. She is an associate professor at the University of Southern California where she teaches fiction writing, editing and literature. She lives in Orange County, CA.