I am pretending to write fiction. While this would normally make what I am writing fiction, by virtue of the fact that pretending, by definition, isn’t true—it is completely true that my fiction is a pretense. It’s not that I’ve never lied, I used to do it a lot, but now I try not to except when I tell people I’ll be there in five minutes; this is always a lie. Well, that’s not true. Then there’s the idea that all fiction is based on truth—like a good joke; we have all these sayings to prove it: ‘There’s a little truth in every joke;” (Does that mean there’s a little joke in every truth? A little fiction in every—what is the opposite of fiction anyway?); “Life is stranger than fiction;” “You can’t make this shit up;” “Tell the truth, but tell it slant.” “There are three sides to any story: your side, my side, and the truth.” As I’m writing this, a woman asks me if I want to sit down next to her on the bus, for I have been sitting on the floor. Ok, so that’s not true. Well, it is, but I’m not really on the bus right now, I’m at a party with my husband’s colleagues. But I actually thought this up on the bus, and I am no longer there, so that is fiction. Right?

When I think of fiction, I think of lying, stealing, and tattoos—the way my mother sees them; every time I talk to her about piercings or tattoos, she gets into such a huff that I tell her just for sport. I told my daughter when I got her ears pierced at a tattoo parlor “call grandma, and tell her that your mother took you to a tattoo joint;” the other night I called to tell her my newest tattoo ideas: “anaphora” on my left wrist; Whitman on my feet; Ginsberg on my ass; and the line “Negro speaks of rivers” on my inner thigh. I often imagine how I could steal things if I wasn’t such a decent person, which of course I am. It reminds of the time I stuffed gumballs down my shirt with my twin cousins Lynette and Jeanette—of course you would know they were twins because all twins must have names that rhyme or alliterate, like my twin friends Ali and Alicia. So, we had decided that since Lynette—being the oldest— had the most breasts of us three, she should be the one to hold the most gumballs in her training bra. This stealing, like fiction, had a purpose. Seeing as though I was deeply anxious about the fact that my 12th birthday was coming up, I had to steal something before I became responsible for my sins; and I didn’t have a lot of time for wrath-of-god-free sinning left. This was not unlike the time when I was walking down Ben Yehuda, in the middle of the city center, past the Orthodox Jewish men sitting at their table with their phylacteries, and I just snatched one and ran. I had no idea what I’d planned on doing with it once I got it; I just knew it was important, that it meant something. Phylacteries, prophylactics, fiction—amulets, charms, to safeguard against harm or danger—if you believe in them, they are true; tell the truth, but tell it slant. 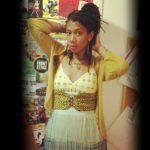 Shoshana Sarah is a multidisciplinary artist, American-born, based in Jerusalem. Creator of Poets of Babel, a multilingual poetry club, she explores hybrid and multi-local identity through poetry/spoken word, lyric essay, and performance. She belly dances, teaches writing, and has recently completed The Shaindy Rudoff Creative Writing Graduate Program. She is obsessed with maps, clocks, compasses, lampposts, and the Tower of Babel while simultaneously having issues with time, directions, and a proud case of “Jerusalem Syndrome.” Her works appear in The Ilanot Review, Yes Poetry,מרחבالفضاء Space, Entropy, Duende, Arc, and “Let’s Get Lit.”