A simple vest though you suspect
there’s a chair nearby, its back
haunted by sleeves and lifeless

stays empty for so many dead
spread out to dry a leather jacket
you were once in love with.

By the handful, in tenderness
yet your shadow erupts
and by nightfall holds on

fill their arms with the Earth
carried around as morning and higher
in stones they know by heart.

–you hear it’s raining :the hush
not right now but at night
these cinders float to the surface

keep one foot swollen, the other
has so little and for a long time now
the listening in secret.

Hot milk, half with butterflies
and the cup helps you think
what happened happened clearly

letting her blouse open so one breast
cooled before the other though you
are 5 going on 5½, tugging a blanket

from far away as nap time, your fingers
under the good morning, boys and girls
–you stroke this soft rim the way moonlight

once overflowed a bell circling down
emptied the room, her mouth, years
now motionless and between your hands.

Exhausted, you need a corner, gloves
and the way a boxer tapes both fists
these two walls can save you

take hold the paint, this brush
making all the right moves
though the ladder half wobbles

you try to make good its great loss
–with both arms, rope off the room
to reach an end for something

that still comes in and hand over hand
put back as if the bell still works
is used to constant fear and distances. 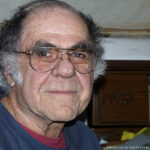 Simon Perchik is an attorney whose poems have appeared in Partisan Review, The Nation, Poetry, Osiris, The New Yorker and elsewhere. His most recent collection is Almost Rain, published by River Otter Press (2013).  For more information, including free e-books, his essay titled “Magic, Illusion and Other Realities” please visit his website at www.simonperchik.com.