At night soaking rain,
you can picture the house a shipwreck
soon uprooted and pulled away, listing and flooding
until it sinks
How lonely we are in this house!
Each one shrouded in a blanket
Each one alone with dreams devoid of people,
in ice wastelands or burning fields, just oneself
and the overgrown, eccentric animals.
You can measure the distances between the sleeping bodies,
between the breaths, you can hear
the heart of the ship gasping like a defective regulator
creaking and diving
as if we won’t get up tomorrow, as always, four,
stretching our wings in the space of the room, as if
we won’t fold them deep into the sleeves
of our wetsuits, as if we won’t fill
the air tanks, before we turn over each other
and go out, one by one, as if there is a sea waiting for us
and not these warped puddles of water.

I grew up in a no-talking family
in a house where they raise a face thick and carry it
like a cover, the features turn inward, eyes stare at
the cracks on the scalp, a mouth chews the jaw cavity,
ears dive, the cortex stiffens and freezes
as if facing an attack, I grew up in a no-comment family,
pecan shells resting
on corneas, the tongue saved
for other opportunities. Words sprouting growths
you must prune and subdue or teeth
will bite from within. I grew up in a no-moving family
in a house where an old sofa waits on every wall
for you to sink into and plant your face
into the armrest for a long, vegetative sleep
until the skin is covered with scales and armor
and a deep silence. I grew up in a no-memory family that doesn’t remember
how time passes by and doesn’t come back, doesn’t
ask, doesn’t answer, forgets,
forgets the waiting, the presents, forgets
the apple tree, forgets the keys, forgets
the pot on the stove and the food is burning,
the pot is burning but the house isn’t burning, the house
isn’t burning yet. 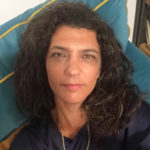 Shira Stav is a lecturer in the department of Hebrew literature at Ben-Gurion University of the Negev, and the author of two scholarly books and many journal articles. In addition to her academic work, Stav is a literary critic and a poet who published two collections of poetry: Lashon Itit (Slow Tongue) in 2012 and Shrir Halev (Muscle of the Heart) in 2019. She won the 2009 Bernstein Prize for literary criticism and the 2013 Bernstein Prize for poetry. 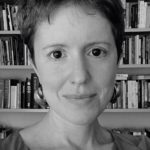 Adriana X. Jacobs is Associate Professor of Modern Hebrew Literature in the Faculty of Oriental Studies and Fellow of the Oxford Centre for Hebrew and Jewish Studies. She has published widely on contemporary Hebrew and Israeli poetry and translation, including articles in Shofar, PMLA, Studies in American Jewish Literature, and Prooftexts. Her translations of Hebrew poetry have appeared in Gulf Coast, Anomaly, World Literature Today, North American Review, and The Ilanot Review, among others, as well as in the collection Women’s Hebrew Poetry on American Shores: Poems by Anne Kleiman and Annabelle Farmelant (Wayne State UP, 2016). Her book Strange Cocktail: Translation and the Making of Modern Hebrew Poetry came out last year with University of Michigan Press. She is a 2015 PEN/Heim Translation Fund grant recipient for her translation of Vaan Nguyen’s The Truffle Eye and tweets @ladymacabea.