Translated from the Hebrew by Maya Klein

When offering me corn, don’t say: “Sweetie, do you want some corn?”

First of all, present me with the corn. Don’t check to make sure it’s ready, don’t blow on it, or slather it with butter, or add a pinch of salt. Just bring it out. C’est tout.

However, you could say: “Here, have some corn.” And you could also say: “Come here, you’ve been a good girl today, you deserve this.” Fine. That actually might even be nice.

But what really matters at the moment is not putting it on a plate, or any other way of serving it. Just bring out the corn and serve it matter-of-factly. And don’t torment me with questions, asking whether I’m hungry. I’m starving, alright?

Secondly, please, do not peel it. Not the outer leaves or those greenish hairs.

I can manage on my own. I’ll part its thin, almost translucent, hairs by myself. I’ll pull the light leaves gently down and off to the side. I’ll use my other hand to gather them in sheaves. And regarding the issue of temperature—if it’s hot, if it’s scalding—that’s my problem. Not yours. Just trust me; I won’t get burned, I never have. And now, if you’ll excuse me, I’ll bite into it. Very gently, slowly, using my front teeth at first. Then I’ll suck a little harder, with my lips. The tongue will get a taste. And little by little, I’ll feel the kernels pop. Popping in my mouth, sweet.

But before that, when I start to eat the corn, don’t ask me if it tastes good, or whether it’s too hot, too ripe, coldish, not ripe enough, bland, delicate or average, or…if I need salt.  Because the corn is good, alright? You can see for yourself. I am here and I am eating. And eating. And growing. 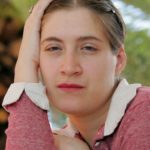 Nano Shabtai was born in 1975 in Jerusalem. She studied stage management in the Theatre Arts program at Seminar Ha-Kibbutzim College (B.Ed.) and graduated with honors from a screenwriting program at the Sam Spiegel Film and Television School. She has written and directed several plays, including It’s OK to Say Anything, Eugene Ionesco’s Victims of Duty, and Covenant of Remnants. She was awarded the ACUM debut artists’ prize for her poetry collection The Iron Girl (Yedioth Aharonoth, 2005). Her other books include: Nano Shabtai – Three Plays (Emda, 2010), the children’s book You Can’t Throw Your Brother in the Garbage (Yedioth Aharonoth, 2012), and the novel The Book of Men (Keter, 2015), which will be published in France in 2020 by Actes Sud. Nano Shabtai is a theatre critic for Haaretz. 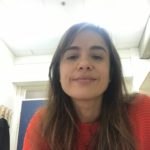 Maya Klein is a researcher, writer and translator based in Tel Aviv. Her work has appeared in “Brevity”, “The Literarian”, “Hamusach” (The National Library of Israel Literary Journal), and “Ma’aboret: The Short Story Project” among others.