She has graduated from her initial freckle period to join the ranks of the superstars.  Shriek, squeal, pout, strip off, it’s a free for all from here.  And who’s gonna reap those big fat juicy rewards, baby girl? her father says, out of earshot of her mother and her mother’s boyfriend.  Us, that’s who, and he poke-taps the flesh below her collarbone with one of his big sun-crinkled fingers.  S’gonna be dreams comin’ true time.

So whaddyou wanna be? her manager asks her.

Like what type, she says.  Sexy?  Goodie-goodie?  Geek chic queen?  I can see you stepping into geek chic.  I am not sure about this sweater, where did you get this? and she tugs the elastic-wool hem with a manicured finger.  I like you in scoop necks.  And more mascara.  Remember the Just 7 shoot?  The response to that is what we should aim for.  Lotta influencer love for that look.  You look flat, your core routine working out?  Did Jay hit on you yet?  He hits on everyone, he hit on me first session, I said if he did it again I’d cut his dick off.  He hits on you, kick him in the scrotum.  Unless you wanna fuck him in which case go nuts.  Her fifteenth birthday comes and goes, her sixteenth.  She puts keepsakes from the shoot in Sevilla around her room, in the house her mom bought with her money (she has learned not to refer to it as her money).  Who’s that? Janelle asks, pointing at the pictures of Juanito, but that’s a secret, that one’s just for her and the birds.

If she squints real hard with her eyes closed, she can see pools of light in the darkness—glowing neon red-yellow pools of love.  It’s cool to have a craft, she tells Dani, like I have this framework I can go to.  Mm-hm, for sure, Dani says.  Have I told you about the pool of love?

Weeell, it’s this pool that emerges from the inside.

I like to dunk my head under in the moonlight and open my Goddamned mouth.

She gets the part, tells herself she’ll just avoid the producer, not be in a room alone with him.  She puts on weight because the Kraft services table becomes her safe place.  Is that a muffin top?  Fuck off Kayla.  She entreats herself to try harder.  She writes a poem:

Where beyond the glimmer
goes my heart?

Where beyond the hearth
that heats my castle
goes my love?

She entreats herself to try harder.  She commits to learning Spanish.  ¿Donde más allá del brillo entra mi corazón?   She looks out for scripts that might shoot in Andalucia.  There is a pool, in Andalucia, that she visits, in her dreams, that she knows like the back of her eyelids.  It’s fringed with bulrushes, jacaranda, scree, and it is always glowing night, and the water is warm at the surface, cool to cold the lower you go, and dark, black, impenetrable—who knows how deep, she can feel it on the bare skin of her legs, her back, and he is splashing in the distant adjoined lagoon, singing

The nomination is a surprise but won’t hurt her prospects one fucking bit.  You seem to have a real quality to you, the septuagenarian director tells her, and his spotless sidekicks nod nod nod.  That’s why we’re interested in you.  She adjusts her sitting position.  Her mother’s boyfriend is thumbs-upping through the window.  The director assesses her lower body.  Yes, he murmurs, yes, and the nodders nod.  If you are sexy, you are the world’s property, he tells her later, everyone has a right to you.  You are Salmacis, you are Daphne… have you read the classics?  No?  Beauty, you see, beauty… it’s so profound.  We all must come to look.  She learns to accept the things she cannot change, the hands she cannot see coming.  She has, after all, her pool. 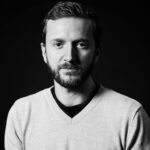 Chris Neilan is an award-winning author, screenwriter and filmmaker. He was shortlisted for the 2016 Sundance Screenwriters Lab and the 2021 Sundance Development Track, was awarded 2nd place for Short Fiction in the 2017 Bridport Prize, shortlisted for the 2020 Aurora Prize and has been nominated for the 2021 Pushcart Prize, the 2021 Shirley Jackson Awards and the 2021 Best Small Fictions anthology. He created and co-hosts the podcast Two Minute Stories (www.twominstories.com) and is the founder of Gor Gai Films (www.gorgaifilms.com). He is completing a PhD in creative writing at Manchester Metropolitan University where he also teaches creative writing.