In too much light long after
the horizon cast off sunset
cemetery maples tremble.
It’s no use to drive on but we do
until the clouds command us back

and then, where the hot red haze spills
over the airfield as if propelled
by a great heartbeat and cicadas
create their own field of sound—then,
telescopes, the house of the sky
open over all transgressions.
Look northwest: a long blue orbit
shaken loose from a ladle of stars.

Translucent milk spider silking,
fluorescing at the gas station—
who’s to say you won’t sway around
again in seven thousand years,
who’s to say your ricochet, too,
won’t offer absolution?

A woman concentrates
on the glossy rabbit
their quilt not far from
the archangel looming
over the damp devil
this is triumph, sun
hot gold bathing or burning
knees scissoring by her head
the rabbit chewing all
the city’s green aliveness
caught in this one leaf 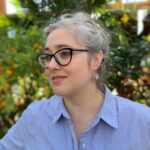 Carolyn Oliver is the author of Inside the Storm I Want to Touch the Tremble (University of Utah Press, 2022), winner of the Agha Shahid Ali Prize. Carolyn’s poems appear in The Massachusetts Review, Indiana Review, Cincinnati Review, Radar, Shenandoah, 32 Poems, Southern Indiana Review, Plume, DIALOGIST, and elsewhere. Her awards include the E. E. Cummings Prize from the NEPC, the Goldstein Prize from Michigan Quarterly Review, and the Writer’s Block Prize. (carolynoliver.net.)