Even now, the body within her body—no longer a child—not a being at all but her own mitochondria, systole, subcutaneous layers like the poet’s dream within a dream, begins to rise from within her throat, from behind the wet-petaled wall at the back of the mouth: all the body knows to do: vomit. A vein of mucus, tinder, shrine, scum. Still life with stillborn. At the Taipei Zoo, AuDi Yu shoots a video of an ancient tortoise stuck on its back, writhing slow as a clock. Whole minutes, stuck. She’d vomited so much carrying this one, so much her sons said, Mama are you a little dead. Her sons put a pear in her hand. A dried apricot, like a sliver of the skin of her hand, the hand holding the hand, the tongue unable to touch the hand and the body within the body—not gone, a child yet—blooming its own diastole. Everyone told her Sick mama, healthy baby, said, It’s so worth it. When another tortoise beheld the one upended, it circled, then used its neck, its shoulder, shell, and torque to overturn, in three commanding moves, the stranded one. Which body wants its rupture back, its august feet on the grass of Taiwan, all the children crying out when they see the big, beautiful creature, righted.

Quick, someone paint this pear in my hand. Someone knock me over and let me spin.

What did she know? Well, the first one came slick and fast and split her skin in the water where she bobbed and breathed him down in the tub of true water, the woman, you know, saying, That’s it, That’s it. How could she know? All at once, you know, he caught the baby’s body with his palms, and That would never be it again, the tumult trapped in love manifesting more than love + tumult: you know what I mean? All at once he held up the thing they call Son and laid him on her chest. And what does she know? They told her, You’ll never be the same, and stepped aside to see such truth expand her. To mother: manifest. You know? She couldn’t say, I’ll never be the same, not because it wasn’t true, but, you know, who can say such things about the self. It was an instant. Then another and then another. You know what I mean. How would you, like, say? If not manifest, transcendent. If not—What does she know? At her breast, a being with bright black eyes, shining. I mean, really? Small, sputter, bleat, stare, having made (it from there to here, alive) her mother. But how?—transcendent, redolent. Could you talk a bit more about—Yes and no. I mean, inside her heart the boar with its tusks speared a star and nobody on this planet spoke its sorrow. Its simultaneous gobs of light pooling in her mouth. You know? 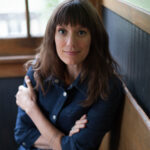 Susanna Childress has published two collections of poetry and is now completing a collection of linked lyric essays titled Extremely Yours under contract with Awst Press. Her creative nonfiction has been published at The Rumpus, Idaho Review, Fourteen Hills, Crazyhorse, Relief, named ‘Notable’ in The Best American Essays, and awarded the Trifecta Longform Prize from Iron Horse Literary Press.