Acting Amsterdam mayor Lodewijk Asscher is considering using police officers posing as Jews in an attempt to stamp out anti-Semitic violence, the Parool reports on Monday.

A spokesman said the suggestion, made last week by Labour MP Ahmed Marcouch, fits in with Asscher’s decision to take unorthodox measures to try to reduce verbal and physical attacks on Jews in the capital.

Secret tv recordings by the Jewish broadcasting company Joodse Omroep broadcast on Sunday showed young men shouting and making Nazi salutes at a rabbi when he visited different areas of the city.

The city’s police already use people posing as pensioners and gay men in an effort to catch muggers and gay-bashers.

It was someone’s job to train the decoys in how to speak, act, what to know. There were obvious things like skip the ham sandwich and mussel soup, don’t shake hands with women, or if you’re a woman, don’t touch any man in public. Less obvious, fingers to lips then to the little box on the door jambe, not the reverse. Pieces of hair on the sides of your head are only pasted on, so don’t tug at them. A scenario could arise where there could be confusion as to who’s real and who isn’t. The doubles could be called in for a minyan and have no idea what to do, and become anxious that they need to be back out on the street, already, that was the whole point.

At the same time there could be actual Lamed Vovniks walking around in the form of musicians playing in the subway, short-tempered ambulance drivers, elderly waiters, clowns and simpletons.  How is the lightning-shaped Lamed different from all the others? It raises its arm above a line of letters, a small fist at the end of its arm. Vov, the sixth letter of the alphabet, is also the Hebrew prefix ‘and,’ responsible for joining two halves of a sentence, perhaps linking two recalcitrant, if not strange bedfellows. The Lamed Vovniks can sometimes be angry and hurl insults, and make it hard for you to recognize them, but underneath everything you think you know from their mismatched clothing and/or mercurial speech patterns lies someone else whose history you can barely imagine. 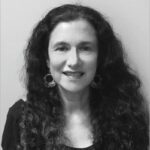 Susan Daitch is the author of six novels, a collection of short stories, and the forthcoming, Siege of Comedians. Her short fiction and essays have appeared in Black Clock, Guernica, Conjunctions, Slice, Tablet, Tin House, Bomb, The Norton Anthology of Postmodern American Fiction, and elsewhere. She was the recipient of a New York Foundation for the Arts Fellowship in Fiction, two Vogelstein fellowships. Fall Out, a novella, published by Madras Press, donates all proceeds to Women For Afghan Women.