We Have the Watches

I carried the 240 Bravo, a weapon sired by the M-60
I also carried my rifle, although it wasn’t required
the thought of going without was terrifying
akin to waking up naked in class
to be shot in the back of the head
& fall forward into a shallow grave
survival a slow death—buried alive

My spine ached, & when the patrol went static
I took a knee not far from three women
fervently working the earth of a garden
while an old man sat nearby watching
I kneeled, then paced, then kneeled again
only able to catch a few furtive glances
the women nearly always sure to be totally on task
except when their eyes flashed over to me

The old man laughed, grinning toothless
as he offered me a Miami from a crinkled pack
the local cigarettes bore an American name & tasted
of burning pitch & stirred ash
two packs for an American quarter

I couldn’t tell if they were poor or not
because at this point war had done more than impoverish
as far as I knew the women might be refugees
from Fallujah, earning their keep at the farm

I called out to the women & old man in broken Arabic
greeting them & asking where they were from
& how many in their family, but the burkas
made it impossible to see expressions & the woman
without one ducked her head into her hair
the old man regarded me as one of another world
come to fight young men in his & usurp a throne
that had long ago ceased to have anything to do with him

“I don’t know why you talk to the hajis,” Sergeant said
“What we say to each other doesn’t fucking matter.”

“There wasn’t any cover where I was, so
I stuck close to them. Figured it was good enough.”

It was then as it is now for Marines in Afghanistan
where we had the watches, but they had the time 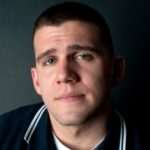 Jason Arment served in OIF as a Machine-Gunner in the USMC. He’s earned an MFA in CNF from VCFA. His work has appeared in The Iowa Review, the 2017 Best American Essays, The New York Times, among other publications, and on ESPN. His memoir, Musalaheen, stands in stark contrast with other narratives about Iraq, in both content and quality. Jason lives in Denver. Much of his work can be found at jasonarment.com.