The Thing About Flight

Although the hummingbird can fly up to 50 mph without
crashing into stuff and certain frigate species can fly
while their brains are half-asleep the human, like the sun,
can go only so long without falling in
on itself—part purgatory, part theme park,
sometimes it’s enough to stroll the verdant copse without
encountering some imploring figure or other,
the sunset a mass of welts, a sky jettisoned
of cloud.  Things explode for a reason:
meteorites, those sub-lunary has-been’s like
a wish-list of priors.  Hit the rewind
on the body cam, point to the appropriate face
on the pain chart, record next to each letter what
you think the mystery powder is.
Dilapidated tonnage of some vision,
some whorl, O beautiful hellacious,
make of me a vessel.

“If the mountain collapses and the hole is exposed, it will let out many bad things,”

The opposite of math is not-math opines the child
inches from the flatscreen where Dad wastes insurgents
on Ultimate Sniper Rematch
like a Tribal Elder, the universe speaks in code
you ask for directions to the multiplex
and they hand you a map of Pangea
behind the somnolent businesses (Bird Paradise,
the Wrapture Decorative Baskets) on optimistically-named Main Street
the woods still smell predictably woodsy
further out, the moneyed yards with their lawn guys and pool guys
another feral cat has expired beneath the porch and the insomniac raccoon
noses the lids of the midday garbage cans
leave the city and with it, the ability to live in the city
the way the first creatures crawled belly-down to the land and,
thus ensconced,
dream perennially of water
in alternate lives they leave the ranch to sons named Cody and Colton and Bryce
no, we don’t want more flatware, a “sitting area,”
the $25 Commemorative Object with Your Child’s Artwork Here
the role of Breadwinner/Homeowner/Policy Holder/Qualified Lessee
a book about crafts made from stuff people throw away
this side of the divide, there remains little
that a spray tan and a Wonderbra can’t fix
the stars in their fixed points like adhesions around the trauma site
after so much use, the rock in the underwater testing site
is weakened to the point of fracture, permeability, and leaking
of radionuclides, i.e., The underground detonation
of nuclear explosions considerably alters the properties of the rock mass,
or, in the parlance of our times,
the whole shebang just holds 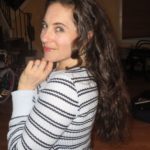 Robyn Art is the author of the poetry collection, The Stunt Double in Winter (Dusie 2007). Her  five chapbooks include Farmer, Antagonist, selected by Jennifer L Knox as the winner of the 2015 Burnside Review Chapbook Contest, Vestigial Portions of the Dead Sea Scrolls, Scenes From the Body, and Landless/Ness all from dancinggirlpress, and Secret Lives of Blow-Up Dolls (dusiekollectiv).