I took them in. They never called me Ma

or Mam, despite the love I gave.

I housed those bratty runaways

despite their multiple attempts

to attract wild animal “pets” from the forest

with the elaborate breadcrumb trails they made

instead of going to school each day.

Everyone says raising teens is tough

but the under ten’s are way harder to train,

always needing incentive for everything:

to lure them to bed so I can finally rest, recharge my strength!

They were eating me out of house and home

just to get motivated and behave!

I tried other ways to keep them busy.

But I saw they were just getting fatter and lazier by the minute.

and, Go outside, go play!  But they would just sit

on the gingerbread couch huffing and staring at me,

every few seconds through red and blue Hawaiian Punch teeth.

I finally snapped. That last day. I just started to scream.

I don’t know what came over me.  I pushed the broom at Gretel,

insisting: Be more helpful to me! I gave the bucket to Hansel

to fill with water and soap for mopping. But they just stood there

doing nothing, gaping at me. Then I smelled dinner burning,

my marshmallow-sweet potato pie I’d forgotten entirely in my rage.

So, into the oven I reached.  And that’s when those hooligans yelled,

We hate you, you aren’t our mom!  That’s what they said.

And it burned hotter than any oven, hit even harder than

those fists that pushed me in. I heard them outside the door

laughing for a moment before the heat began searing my skin.

The house is ours! fat Hansel yelled while Gretel sang

the words: “Home, Home on the Range!” over and over again

probably dancing on the dirty floor not even knowing

the next lines, from all the school that she skipped. 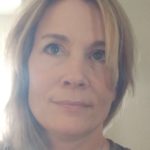 If you were looking for it, you’d find Monique Gagnon German‘s poetry and fiction in over 35 journals including: Rosebud, California Quarterly, Tampa Review, Off the Coast, and, The Wayfarer. Monique is a Pushcart Prize nominee. Her fiction has been featured in: Kalliope, A Journal of Women’s Literature & Art, The MacGuffin, and, Adelaide Literary Review. For more info: http://moniquegagnongerman.webs.com/