They had promised I could swim with them, my four older sisters and me. I was strong and sturdy enough, even if I was barely a woman, still flat-chested and unsure, while they displayed their rounded breasts and long tresses with aplomb. We swam for several hours until arriving at a spot near some high cliffs my sisters called Punta Campanella. The four of them merrily sang together out on the waves, their voices blending perfectly. Each time a song ended, I thought we’d swim on, explore, play a game, but they simply began another. After the fifth song, I joined in pretending to know the tune. “Shhhh! You’re off key! You don’t know the words!” they hissed. I floated there, mouth clamped shut, their sterling notes hitting me like stones. Time stalled. My sisters seemed content bobbing in the waves, singing their lungs out. I wished I’d never followed them and was back in our cove where I was free to splash and frolic with the fish. I decided to turn back, even if I wasn’t sure of the way. As I glided off, my sister Peisinoe grabbed my ankle, pulled me back to her side and held me there. A giant ship neared. “Watch,” she pointed. I saw the boat stall, the sails ripple then tear, the men on the deck scrambled as the hull split open on the rocks. The sailors wailed and were tossed into the sea. The lucky ones clung to splintered boards. The whole time my sisters sang. The men splashed, yelled for help, some sank, while others drifted away. Their voices rang out above the men’s anguished cries; delight lit my sisters’ faces like lanterns as they savored the sailors’ misery. Their silver notes skimming the water with the wind. 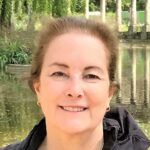 Andrea Marcusa’s work has appeared in Gettysburg Review, Cutbank, River Styx, River Teeth, Citron Review, and others. She’s received recognition in a range of competitions, including Glimmer Train, Raleigh Review, New Letters and Southampton Review. She’ s a member of the Master Class at The Writers Studio where she studies with Philip Schultz. For more information, visit: andreamarcusa.com or see her on Twitter @d_marcusa