Dear crack in the wall,

———what do you portend? I write with no ruby
cheek or lip, no garland of snowdrops round my wrist. I write without
a meadow or a lark, without a hope for sleeping spells
from which I’ll wake, refreshed. In another life,

———I missed my chance for a honkeytonk bedonk-a-donk
for a foolproof skin care routine, for neon-mesh fingerless gloves
or leather pants, for a dungeon party in San Francisco. I never rode
a lowrider or swung flags at a drag race. Nor did I drive

———a combine, despite the spark in my heart each time
I saw one comb a field. I submit this dry, domestic drama, something
folded, tidy in an envelope. I have a spice rack and a mantel, both
in need of dusting. I have secrets,

———nothing so unnerving that I’d bar you from my kitchen. Do you hear
legs sprouting from potatoes in the pantry? The fingers of a fern upon the sill?
Here’s a pound of fleshy apricots. Here’s a pot for stewing jam. Here’s a blade
————————————of lavender. It was planted by the wind.

My sons are still new in their bodies, surprised
by the golden sprouts that limn their scuffed shins, the knots
of muscle just popping along femur, humerus. They spelunk
in their navels for treasure, plumb their pits’ depths, duckwalk
and shimmy and bend and bandy. They hurtle
themselves from the stairtops, pressing their chests against air’s
thin resistance. Thoughtless, they trust their unwinged shoulders to carry
them over the chasm. And reader, their nakedness dazzles! An azure
so brilliant I cover them up, lest someone steals them, lest I envy too much. 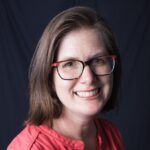 Emily Pérez is the author of What Flies Want, winner of the Iowa Prize; House of Sugar, House of Stone, and two chapbooks. She co-edited the anthology The Long Devotion: Poets Writing Motherhood. A CantoMundo fellow and Ledbury Critic, her work has appeared in Prairie Schooner, Copper Nickel, Fairy Tale Review, and Poetry. She teaches high school in Denver, where she lives with her family.