Before the butterwort left a hollow chitin exoskeleton after sucking the insides dry, you must’ve noticed his pearly sweat beads, his violet lips on a long stalk, suffused with a striking reddish tint, and wanted to conceal someone essential to you. But Tina was a non-biting midge; she hovered around enchanted while you watched helplessly. You must’ve detected the neat order of things, the existence of an intricate invisible trap, believed she’d see it eventually, but she chose to be a warrior—warrior not as in riding a destrier, but warrior as in martyr.

You can’t help but imagine him break into his evil-butter-smile after he’d had his fill; the discarded red bubble jacket and dark jeans on the floor, while your girl shattered into dust in your arms.

Your nest is milling with people, at the centre of which Tina lay peacefully. You share a chronicle of her loneliness for the week after that day with the mourners, as if in trance. You talk of her half-breaths on the periphery of existence, her dissolving into nothingness. You recount like dream, snippets of your togetherness with your only sixteen-year-old daughter.

Her dad sits, head balanced in a freckled middle-aged hand, the look of a sliding drop. He isn’t privy to Tina’s call records, the depths to which she trusted her classmate, and denies yet the knowledge that your prescription sleeping drugs in the drawer went missing last night.

After she’s carried away, you begin to detest the semblance of regular in your happy family home, in Tina’s orderly room—the curtains, fresh dahlia in the vase, books on the rack, all reek of something your world isn’t. Chaos. You wade into the turbulence where alligators and frogs live, where the shadowy tree’s roots and cypress knobs nestle birds. Tina holds your finger like she used to as a three-year-old in her polka-dotted frock when you descend the crescent swamp between the mangroves. Together you’ll troll the mucky brown down; where the jewel bright, blue and red damselflies reside; mud up to your knees; let the will-o’-wisps ignite the flame in your hearts.

With reedmace towering over, you’ll hunt out the butterwort from behind the sheaths of defense he’s conjured up. 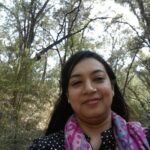 Mandira Pattnaik writes in India. She is humbled to have work published or shortly due in The Times of India, The Bombay Literary Magazine, Gasher Journal, Panoplyzine, Flash Flood, Splonk and Watershed Review among others. She recently appeared in the NFFD celebrations of New Zealand and was shortlisted at Retreat West Microfiction Contest.