They’ve seen enough of grief
the angels : their

are filled : they choose
to trust less

than what they see

& in their stories
the doors

but today they are back

to study the body : to discover
the measure

of what is lost

in the shutting : burdened
with paperwork

observation
from opinion : one column

but always in the leaning
into the page

they miss the essential

the turning
of the key of grief

in the lock of the body

you need to be human to bear.

We have a mechanical situation.
We are being kept apprised.
We have walked from Gate F 6 to Gate F 26 in search of a new plane.
The new plane looks sad and cold in the unlit night.
No one stirs but the searching.
A blue screen above the doorway says, Welcome to Philadelphia!
Somewhere nearby a young woman is speaking into the microphone: This is the last boarding
——–call for flight 4923 to Richmond. Please get your butts on board!
A man with a red Semper Fi cap is playing scrabble on his phone.
One two three children are sleeping.
Behind me, a young man is explaining how he passes the time. I like to look at the couples
——–and think about them making love. I try to imagine them making love.
When I walk to the water fountain, I see he’s young, a young vet, holding hands with a young
——–woman. When I return, they’re sitting with the man in the red Semper Fi cap. The young
——–vet is saying, I gave a part of my body for this, so people can stroll onto planes in flip-
——–flops and tank-tops. He sits slightly curled, as if his belt were one notch too tight. I keep
——–thinking. I gave a part of my body so he can fuck her –
I don’t see it, but the man in the cap must have given him a look, because the young vet says
——–sorry, Sir, and the man says, If you can be strong for a day, you can be strong every day.
I don’t feel strong, Sir –
Feel? he says. I didn’t say feel.
The young man says, Sir.
You ever wish you’d died over there?
Every day, Sir.
But that would have been easy. Dying isn’t the test. Dying isn’t what you trained for. You know
——–what is?
What, Sir?
The man spreads wide his hands. As they look up, I look quickly away.
The sign above the doorway is flashing now, as if to say, You really really really are welcome to
——–Philadelphia!
The young vet’s girlfriend has been listening, stroking his hand, and the young vet can’t seem
——–to look anywhere but at her hand.
I keep telling him, she says. Ain’t that important, what happened to you. Doesn’t bother me.
——–What’s important is you came home.
There’s a weight in the air, and a quiet, and I’m not the only one listening. Outside, the lights
——–of the plane flicker on, then off.
Before he shipped out, she says, our favorite thing was to walk. We used to go for the longest
——–walks. And I keep telling him. We can still do that. How lucky are we? We can still do
——–that. I mean, that’s all I prayed for. Let him come home, and we’ll walk, like we used to. 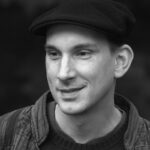 Philip Pardi is the author of Meditations on Rising and Falling, which won the Brittingham Prize and the Writers’ League of Texas Award for Poetry. His poems, essays, and translations have appeared widely in journals and in anthologies such as Best New Poets and An Introduction to the Prose Poem. His most recent project is a volume of translations entitled A Better Language: Selected Poems of Claudia Lars. He teaches at Bard College.