Black as a fire eater’s throat,

that snake I saw, one morning,

at the bottom of our steps, must have

maybe nozzled up through a base-

board gap, a periscope to watch me

wriggle facedown across our sheets,

as I tracked and tweezed each slither

of the other woman’s hair. I knew

the more I imagined it, coiled on the floor

the more the snake would seem a tongue

extracted from some larger beast,

maybe the mascot to a coming gloom,

so I turned the TV on, and—Voila!—

there it was again, curled around the handle

of a broom, the actress holding it up

for me to puzzle over, like a string I’d tied

around a finger, then forgot. How

childish to think it an omen, a scrap

from the witch’s spindle, to believe

that the world really does continuously

vanish and reassemble, that each

from sneak—the world a carnival

broken down in one city and resurrected

in the next.  For days, my own shrouded

thoughts were a wrinkle passed forward

through its flesh, and I waited for it to pour

from the faucet to your bath, for you

to see it in the coils of a lightbulb stem,

to feel the idea of it hemmed

into your throat. When finally the house

started changing shapes around us,

when you asked, at last, why, when

my phone rings, did I always kill the calls,

you pulled the curtain on the quick-

my head, solved the anagram before

it was composed and said, I just hope

she isn’t pregnant, then turned and slipped—

as I scuffled and stalled—a hand

along the jigsaw scales that, for weeks,

I’d been re- and rearranging in our walls.

On nights you felt like dying,
you’d drive to McDonald’s
and order a Diet Coke or a shake
and sit at a corner table watching
your reflection changing shapes
in the windows. Some nights
you stayed for a long time, reading,
refilling your soda, letting
your sadness be processed into
a tolerable numbness as you eavesdropped
on the teenagers flirting
with each other as they wiped down
the tables around you, or mopped
beneath your feet. How lonely you
must have seemed to them, how odd,
sitting there with a tattered copy
of John Donne’s poems—Hymn To
God, My God, in My Sickness—
turning pages slowly, or setting
the book aside while you thought
about the lines and watched the sides
of your soda cup beginning to collapse.
“Therefore that He may rise, the Lord
throws down.” How many nights
did it take you to truly feel the meaning
of that line, and how long before you
realized that this was your own meager
vigil, waiting for some part of you to die
so that the self might emerge again,
mythed and purified, filtered through
the calendar of stars which quakes
inside of every cell? And when
finally you rose and pushed your tray
through the swinging door of the garbage
can, and pulled it back empty, you
walked into the parking lot, and felt
the whole sad routine made holy
by your leaving, those teenagers spraying
the windows down behind you and—
“as death doth touch the resurrection”—
remaking your reflection as a gleaming. 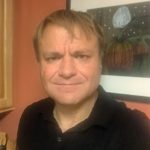 Steve Gehrke has published three books of poetry, most recently Michelangelo’s Seizure, which was selected for the National Poetry Series. His other awards include a Pushcart Prize and a grant from the National Endowment for the Arts. New poems have appeared in The Yale Review, New Letters, The Southwest Review, The Kenyon Review and others. He is an Associate Professor at the University of Nevada-Reno.