“Garbage Duty” is the winner of the Flash Story Contest hosted jointly by The Ilanot Review and the radio station Israel Story.

Night is falling and Aryeh swims alone. He is nearly seventy years old, undulating across the water with power and ferocity, making the sound of crashing waves.

Bryan can’t help but stare. He stands on the synthetic grass around the outdoor pool – the real cash crop of Kibbutz Asis – holding a flimsy, orange garbage bag in a rubber-gloved hand. While there is still some light, he is meant to collect the scattered trash. The gum wrappers, the cigarette butts, the bamba. Bryan has learned that bamba are a favorite Israeli snack, but they look like turds. He’ll deal with them later. He lets the garbage bag hang empty and limp at his side while he watches Aryeh’s butterfly stroke.

Butterfly is inaccurate, Bryan thinks to himself. Barracuda would be more apt. He is pleased with his cleverness, but when he finishes his after-dinner detail, there will be no one with whom to share this quip. Bryan will return to his ashkubit, the Lego of concrete that has been his home for the past two months, and the other college-students-cum-pioneers will want nothing to do with his cynicism. They are having the summer of their lives; the loyal footmen of Captain Aryeh. But they haven’t seen Aryeh as Bryan sees him now, his powerful arms gripping the water and tearing it apart, his left leg, his only leg, whipping it from behind like a cruel taskmaster.

Aryeh’s things are on a white plastic chair: A canteen of water and a striped, plush towel taken straight from the laundry of Hotel Asis, another kibbutz venture more profitable than the sour cherries and the nectarines. Aryeh’s prosthetic leg is nearby, and it occurs to Bryan that if a man walking on the moon is a snapshot of the American spirit, then this is the Israeli version: A prosthetic leg, upright and unashamed, on the deck of an Olympic-size pool.

Aryeh’s leg was blown off in the Six Day War. He and the man he saved went on to found Kibbutz Asis. Asis, meaning nectar, as in: Behold, the days come…and the mountains will drip nectar. They beat their Uzi rifles into ploughshares, planted orchards, and the flow of spilled blood on this treacherous mountain was transformed, as promised, into the steady drip of nectar, the sweetness of life itself.

Even then, when Bryan heard this story, less than twenty-four hours into his adventure, he bristled at the heroism, though it was precisely the reason he’d come.

The next day at dinner, after Bryan’s first try at kibbutz labor and first encounter with dehydration, Aryeh tripped him in the cafeteria.

“It was an accident,” said Chloe, the eminently magnificent. “He limps.”

“No. He swaggers,” Bryan said, to disastrous effect.

Bryan is ignoring the crap that is his job to clean on this, his final night on the kibbutz. The longer he waits, the harder it will be to find the sunflower-seed shells that were spat between the blades of synthetic grass, but Bryan is not thinking logically. He hears the lapping sound of Aryeh’s swimming, and he knows what he must do before it is too late, before he is back on the East Coast with no roadmap to meaning and no acts of bravery on the horizon, fuming with anger that he was useful to his so-called people only as a janitor. And besides, it’s a kibbutz. Everything belongs to everyone. No one is better than anyone else.

Aryeh pushes off the wall for another fifty meters. As he swims away from the plastic chairs, Bryan takes the prosthesis – smooth and lighter than he’d expected – puts it in his orange garbage bag, and cinches the bag closed with his gloved hands. He silently walks off from his post, down the walkways, to the cafeteria dumpster. The stars are budding in the sky as Bryan raises the lid, barely making a sound. 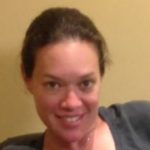 Bracha Hermon has a BA in Bible from Bar-Ilan University and an MA in Jewish education from Yeshiva University. After several years of teaching in New York, she returned to Bar-Ilan to study writing. Bracha currently lives in Jerusalem with her husband and two children, where she works as a freelance editor.