Thief!-/ how did you crawl into/ crawl down alone/ into the death I wanted so badly for so long (Anne for Sylvia when Sylvia killed herself)/ then when Anne died of suicide Adrienne said/ We have had enough/ suicidal women poets/   enough    suicidal women/   those were the words you left me with/ when you came to see me in the hospital/ after the first time I handed you/ a draft to a manuscript about rape/ Tel Aviv was raining/ when I left your apartment/ I went home/ destroyed all the poetry/ copies hard/ soft/ desktops- backups- clouds/ swallowed rat poison/ from the hospital/ the night I couldn’t sleep again/ I wrote you how I went to the kitchenette/ and met/ a tiny almost       invisible woman/ she showed me her x-rays/ holding them up against the open fridge/ her legs/ sixteen sewing pins she inserted in/ with their little pin heads/ they swam through her like sperm/ her father was a holy scribe/ he wrote Torah scrolls/ he rose before dawn every single day/ to catch the early prayers/ on his way out while everyone still slept/ stopped in her room/ turned her over on her stomach/ so he wouldn’t have to see her eyes/ the way some people set the head away/ on a separate plate with the bones/ to enjoy a fish

you left me with/    enough    of self-destructiveness/ as the sole form of    violence/ permitted to women/ with a dream of a common language/ with Audre’s: Poetry is not only dream/ where that language does not yet exist/ it is our poetry which helps to fashion it/ for women/ poetry is not luxury/ as if all I had to do was turn my pen into a sword/ turn that sword toward out/ not in/ practice/ the opposite of sword swallowing

this isn’t suicide it’s murder/ May said when I gave her a ride/ after Anat’s funeral/ she got out of the car/ set down her crutches to be free/ to hug me/ with both arms/ that’s when my rib cage locked on the knowing/ my brain couldn’t then/ can’t even now/ I would never ever see her again/ when May died of suicide I said nothing/ wrote nothing/ the answer is buried in silence, a purposeful and wicked silence, a lying, cheating silence (Andrea)/ the technology of silence/ The rituals, etiquette/ the blurring of terms/… Silence can be a plan/ rigorously executed/ the blueprint of a life… do not confuse it/ with any kind of absence (Adrienne)/ tonight no poetry will serve/

there is a Chinese word for the female I—which is “slave.” Break the women with their own tongues!  (Maxine)/ vagina literary means a sheath/ a cover for/ a place to put/ a sword (Anne F.)/ For the master’s tools will never dismantle the master’s house (Audre)/ and have you seen the evidence that Sylvia was  raped in New York/ Anne molested by her father/ both were abused by physicality/ both hospitalized in the same institution/ where Anne’s doctor concluded poetry had saved her life/ but what did poetry really do for them/ psychiatry a master’s tool/ words/ language all master’s tools/ breaking silence/ a trap/ a myth/ an underground railroad leading back south

In loving memory of 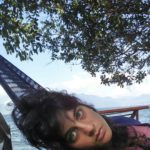 Marva Zohar is a poet, homebirth midwife, and feminist activist. She is currently living in Jaffa, where she trains holistic gynecology practitioners. She is now completing her MFA from Bar-Ilan University with a focus in documentary poetry about gender-based violence. She is the winner of the Andrea Moriah Memorial Prize in Poetry. More of her work can be found in publications such as The Ilanot Review, Gag, Ynet,  Midwifery Today Magazine, Brick Plight press, Lavender Review, Tule Review, You are not born woman – An Anthology, and in translation to French in terre a ciel.