The dingy hallway is just like any other dingy hallway in any other building where bureaucracy rules: off-white walls with brown borders and speckled floor tiles, all lined with chairs to wait in. I try not to hurry to the room at the end of the hall, another waiting room, even as I try to get there in time. I don’t: The door on the other side of the waiting room is already closed, so I approach the lady sitting behind the glass. “Can you open that door for me?”

It doesn’t occur to me until after the words leave my mouth, but there are a lot of ways to answer that particular question. It depends on what information you want to give. You can give your name: “I am Itai.” There are different permutations of your name you could give: “I am Itai Mesch.” If I had a middle name, I could potentially throw that in, or if I had a nickname I could substitute that. If I were online I might introduce myself with my username, or a version thereof.

You can also describe something about yourself: “I’m a writer.” Or “I’m a student.” Everyone’s got plenty of labels for themselves. “I’m a 26-year-old man.” That’s one you’d have to update every year or so. “I’m the biggest Billy Joel fan in the world.” I don’t think that’s strictly true, but people usually understand that it’s hyperbole. You can talk about yourself in relation to others. If the person asking knows who David is, I could say, “I’m David’s old roommate.”

Maybe you have some accomplishment that someone might recognize. “I’m the kid who got 3rd place in math for all of Broward County when I was in 6th grade.” No, that one’s pretty out of date. I don’t know, I’ve never really made the news for anything. Maybe you have.

“I’m Spartacus!” It wouldn’t answer the question at all, but it might get you a laugh if the person understands the reference.

But the way you answer that question, when someone asks “who are you,” is dependent on your context, where you are and who you’re speaking to. And in this context I’m in the basement level of the Rambam hospital in Israel, three floors below the second-floor neurosurgery ward, in the waiting room for the MRI machine, and the question is being asked by a nurse. So there is only one answer. At that moment, it’s the most important answer that I can give, the most visceral words that can possibly leave my mouth as I look towards the frosted glass doors that will remain electronically locked unless this woman presses the button on her desk. Without a moment’s hesitation, as though it’s an instinct ingrained into me, I reply:

The nurse tells me that only one family member is allowed in at a time, and I know my father’s already there with her, so I sit down on a wobbly metal waiting room bench and contemplate the multitude of ways you can answer a simple question. 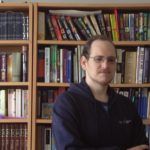 Itai Mesch was born in Israel, grew up in Florida, and then moved back to Israel in 2005.  Since that time, he’s studied business at the IDC Herzliya and studied creative writing at Bar Ilan University. This is his first published piece.