From the Plains The Son

He stepped outside a certain house.
Inside walls wore the color of disagreements.
The floors warped – stove to table, to sink,
back porch – twelve steps up to a landing, twelve more.
Next to the bedroom door the pipes groaned at four-thirty
as the father shaved without reflection.
And the coffee and the suppers went on forever;
and the same branch scratched at the same window, and the same hinge cried,
and the man’s pipe puffed off signals telling his whereabouts,
and the stick matches – boxes of matches, and saltines,
and jars of instant coffee, and jars of peaches.
There was bleach and the sad banners of thin sheets,
and socks stiff with rheumatism bent over the line.
And the drive that sloughed a talc for years
filled their lungs with comings, and goings,
and staying.

In a certain house,
at a kitchen table
where moths collect burning their wings
a man, a woman sit kneading the oilcloth, handkerchiefs,
the arms of their own oak chairs
without a child or word between them.

Paint windswept from the siding – the house, the barn.
How the jonquil beds lay flat along the roadway in,
and the tobacco smell in the wool coat gone out
from years where it’s hung on a peg, on the shed door.
Its empty pockets, the door hinge
mouth goodbye, goodbye
if ever pride returned. 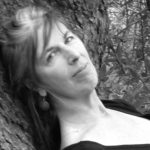 Ab Davis, raised in an art colony on Cape Ann, Massachusetts, spent years on a cattle ranch by the Crow Indian Reservation, Wyoming, and a decade on a remote homestead surrounded by National Forest, in Washington state. She now lives in California and writes with a small group of Buddhist women. Her work has appeared in San Pedro River Review, Bellowing Ark Press, Buddhist Poetry Review, and elsewhere. She has completed the novel Unraveling Red.