When it was finally warm again, we let the horses
out of the stable to feed on the new grass growing
in the front yard. I’d always be the Indian
my cousin, the cowboy, and we’d run screaming after
one another in an obstacle course between the horses.

I fell in love with Jason because the horses did, I think
Daisy and Dodge would let him drop from an overhanging tree branch
onto their backs without a twitch. I tried with Daisy
once, ended up flying halfway across the yard, and that was enough
for me. “She just don’t like Injuns,” Jason said
holding me in his strong, sunburned arms
while I tried to catch my breath
and I tried not to cry.

He married young, so young, and his wife
tried to kill me the first time she met me
a twenty-year-old maniac who drove with a kitchen knife laying in her lap
told me he had confessed to being in love with me
told her all sorts of quiet things about me.
I tried to explain that things happen when kids grow up together
sure as curious farm animals, cats and dogs in heat
but she just didn’t want to listen. 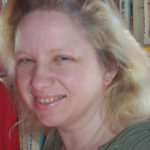