I could fuck a Frenchman.
A straight one.  It’s an unkind thought
& I don’t mean
to sound hostile, cause unlike Cheney
with his pent rat eyes,
I’ve no dirty bone for the men of Paris.
I could fuck Sarkozy while at it
(notwithstanding he’s half-
Hungarian).  Here’s why: Those hips—
those slim Gallic hips—& how
long-beaked men hunch like question marks
honking vowels in cafes
through thin pooched lips, how they stare
at their words as if flies
in warm beer, drawing deeply
from dwindling Gauloises between languid
susurrations (though I hate the smoke
& crooked brown teeth).  But
I relish their smell.
Bad.  Like rank Camembert.
I could fuck a French woman too
if she had hips like a boy
(which most of them do)—Tatou, Huppert,
Mou-Mou, Adjani—their high taut dugs
suspended from lean clavicles
like wishbones licked clean. Or if une madame
ou mam’selle raised her arms
like Patti Smith on her album Easter
(she’s not French but should be)
& there, burrowed in soft hollows
where torso meets reach
nests a small dark vole, a drowsy chinchilla.
Oh yes, old & new,
I could fuck all the Frog people.  Except
Carla Bruni, France’s former
First Lady, who’s too tall, too clean, too
trop tres soignée (& really a wop).
Would it mean jack if I’d never been there?
Cause truth trumps knowledge
as good patriots know, for the goat
in me’s growing. I can’t control
these rodent thoughts,
the barb in my blood, the rabbits
of my desiring: how a mink’s sharp teeth
bite into my nipple.

If John Wayne were a drag queen, twice
over, it might make sense—a guy née
Marion who’s a gal hamming a dude dubbed
Duke. Then if I were JW’s daughter
I wouldn’t have cared
when I found Daddy dancing the Frug
in pink lace panties (as long as
they weren’t my Mom’s or mine).  Maybe
I’d have dug out a doobie cause
Pops was so cool. Though if I were
Wayne’s son, I might have been
bothered, might have wondered why
Father reads to me in bed,
puts his arm on my shoulder, might have
questioned my baseball mitt’s grip.
For sure I’d have rethought
Dad’s hissy fit over Monty Clift
in Red River, rescreened The Searchers
to see if sway in the Old Man’s hips
was really sashay.  Or I might have just
shot him—which is what a man does
when his horse is in pain, when
the damage can’t be fixed. Yet if I were
my girlfriend thirty years ago
I might have been lying when I told me
I’d talked with John Wayne
in a wheelchair at Mass General
alone in a hallway, just a month before
he died. He was wearing
a soft blue gown that fell slack
off his shoulder. Like a scarecrow
unstuffed—all hollowed-out.
Do you need anything?, my girlfriend asked.
Looking up, Marion rasped in a weak
hoarse voice with his slingshot drawl,
Ya could…hold my…hand. 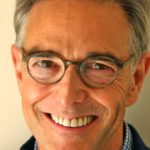 Ralph Hamilton is editor of RHINO, an independent poetry journal based in the Chicago area in its 39th year of publication. He has an MFA in Poetry from Bennington. His poems have appeared in Court Green, CutBank, Pirene’s Fountain, Blackbird, and other journals, and he has been nominated for Best New Poets 2015. His first book of poems, Teaching a Man to Unstick His Tail, was recently published by Sibling Rivalry Press. He is currently finishing his second book, The Barnyard of Boyage. Hamilton was recently selected as guest editor for the debut volume of Glass Lyre Press’s Aeolian Harp Anthology.