It was a delight and a minor magic
how a quick rub of the red-tipped stick
made it spit its phosphorous flower and hiss,

but a father could do a far neater trick
to unleash in a son his original sin
and a pyrophiliac’s thirst for a rush!

He doused the leaf pile with gasoline
till the tang of it bit the air and wicked.
Then, at the moment the match met fume—

something so charged, loaded, and cocked
that the boy’s would-be fear alchemized
to joy in the surge of his volatile matter!

Outrageous play this was, and he loved
the face-sweat, eye-burn, singe, amazed
to watch the mountainous pile crater,

leaves, sucked of color and substance, char
and curl like hands of the damned, and ash
ride wild updrafts on the ethereal waves.

and his father knew by the sooty sheen
of the boy’s cheek and his smoky air
his soul had lost some of its innocence,

but what fortunate fall!—to befriend this prince
who liberates light, the great unmaker
of fiats, both human and divine,

to see the boy’s igneous stuff be lit,
his feral gleam and excited gait
a gospel with a grinning prophet. 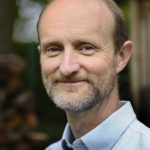 Mark Hart’s first collection, Boy Singing to Cattle (Pearl Editions, 2013), won the Pearl Poetry Prize and was a finalist for the 2014 Massachusetts Book Award. His poetry has appeared in Atlanta Review, Chautauqua, RATTLE, The Evansville Review, Tar River Poetry, The Spoon River Poetry Review and numerous other journals. Raised on a wheat farm in the Palouse region of eastern Washington State, he now lives in an apple orchard in western Massachusetts. He works as a psychotherapist in private practice, a Buddhist teacher, and a religious advisor at Amherst College.