This woman wears only clothes she’s bought
at thrift stores, not because she can’t afford
the latest styles, and not because she doesn’t yearn
to be beautiful. In fact she is very beautiful
and she dresses with great style. But she loves to imagine
the bodies who inhabited her clothes when they were
brand-new, the smell of those women’s sweat,
their perfumes, the quality of nervousness or happiness
that seeped from their bodies into the weave
and woof of the fabric she wears now.

In that town, young men still fish from bridges
and seawalls though the fish have vanished.
They walk home in the afternoon with their empty buckets,
making up stories: When I was a boy
there were so many fish in the harbor, my father
and I could lean over the side of the boat
and gather them with our bare hands; we’d pack
the rowboat so full I had to jump out
and swim along beside it, while my father pulled the oars…

She listens to their voices as they pass below her window.
She yearns to call down to them, just to say hello,
maybe to ask them upstairs for coffee.
She’s known them all her life. But she watches instead.

And as evening falls she stands at her mirror
and dresses in each of the strangers’ outfits
that hang in her closet. When her closet is empty,
she lies down to sleep, inviting the birds
of her dreams to fly into her window to carry
her clothes out over the water, to drop them
like shadows in the water, each of which becomes
a school of fish. And then the birds fly off
into the kind of dream we forget
as soon as we wake. She lies there a moment,
feeling her body as she gazes at the ceiling,
hoping the young men will catch something now,
thinking of the big bones and the small bones in those fish,
and wondering what she will wear. 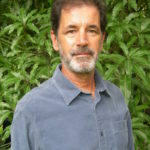 Michael Hettich‘s most recent book of poetry is Systems of Vanishing, which won the 2013 Tampa Review Prize in Poetry and was published in April, 2014. Other books include The Animals Beyond Us (New Rivers Press, 2011) and Like Happiness (Anhinga, 2010). His poems have appeared in such journals as Orion, Ploughshares, Prairie Schooner, Alaska Quarterly Review and Poetry East. His website is michaelhettich.com