I know that a movie is bad when it begins at the middle of an almost forgotten song, let’s say Johnny Cash’s Hurt or something that suggests pain is clarity, and you’re scratching the back of your head, saying some lines which are meant to be for a main character I always imagine myself undressing you to find the ever elusive stability of my own being, a certain closure of who I really want to be.

And then there’s applause which is just an inserted sound and because I can’t interact with its origin—it’s a people, it’s a guitar, it’s a body which is a cause of rebellion, it’s nothing…

I just can’t stop it from assuming that we are friends, we will not forsake each other, and we are ending all the scenes together, hand in hand, body to body, against all odds. I ask myself why
do I have so much time to continue watching this bad movie which you ask yourself too and largely the question focuses on what’s forbidden. Obviously, even if the forbidden is likely to say don’t do me, part of not doing it is to be an accessory of what we must hate so I’m kissing your feet and you’re kissing my nape and we’re thanking God for inventing heaven or where invisible things come from.

I know that a movie is bad when it begins with me singing the lines which are supposed
to be thrown by a main character in a fight scene. I sing and you clap. I sing and I end the clap
by clapping, awarding myself, I’m fit for this character. Let me do it again.

This time you begin it and sure you expect me to end it. But I don’t know how to,
is there really a way, so I ask God why have you been an alcoholic and unsafe to be with?

Of course, God is not here, that’s already a principle of our intimacy, so you give an answer

as a substitute I’ve been like this so I can tell you a history of love. And I say It’s a bad response, darling, you need practice. Invent therapeutic words. Lines which will help me forget my bruises. Something like that.

Rehearse. Perform. Rehearse. Make love as if one day it would be history.

50th minute after you got a phone call from your angry father, I completely broke down a distillery where you were singing, were asking me to sing and I sang with you but I was hoping that God would bring rain so I wouldn’t hear anything anymore. But God was, perhaps, unavailable at such time. He was probably in another bar showing his muscles and secrets. Should we wait for the rain? you asked.

You know this movie is so bad that we’re waiting either for the rain to stop or for the rain to come. Should we not know what it is we’re waiting for? I ask and I kiss you, I have to, there has to be human in this story no matter how forbidden it is. Has God come yet? is your line while stitching a collar back my bone. 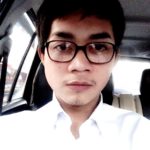 B.B.P. Hosmillo is a Southeast Asianist queer poet. He received research fellowships and scholarships from the Japan Foundation, Asia Research Institute-National University of Singapore, and the Republic of Indonesia. Anthologized in Under the Storm: An Anthology of Philippine Contemporary Poetry (2011), he is guest poetry editor at Cha: An Asian Literary Journal and nominated for the Pushcart Prize 2015 and Best of the Net Anthology 2014. His poetry has appeared or is forthcoming in SOFTBLOW, Toe Good Poetry, Kritika Kultura, OCHO: A Journal for Queer Arts, Quarterly Literary Review Singapore, and many others. Contact him at bryphosmillo@yahoo.com.