To the Stone Washerwoman in a Column  in Gaudi’s Park Güell:

All persons are of rough and polished parts. I offer my words to the public square, place them in stone crevices to be bathed in spider silk. My words have been consumed by adamant sculptures.

Today I stumbled and did not exist by hand. I walked ten miles for this purpose and abandoned my poems. Why we must say goodbye?  How might I explain: olive trees, rosemary, marriage.  I married beneath one hand. Your escort.  This obvious berth, in words.  I married a photograph of the aroma of rosemary, and timely mediations, sea creatures and the ephemeral.

I wanted to be the stone washerwoman, in a column. I wanted to be her and to be with her. On a day entailing the lengthy surgery of a friend. Will the words of any poet invariably contain trauma?  I cannot advise you to put the unlaced narrative down, like the one who carries a boat needlessly through the desert.

When your message arrived I had just found the oldest remnant of our common ancestors. Yet the building was under renovation and all that remained was a metal plaque. And because I was not allowed to enter the sanctuary, instead I turned a corner in the old Gothic neighborhood, and found myself in front of Satan’s coffee, which had been highly recommended.  I entered, ordered, opened my appropriately red notebook.  I waited for the end of complicated surgery, burials of history, explosions. Once settled I was informed that the place was to close in ten minutes.   Expelled from Satan’s protection and thrust again into half-hearted rain, to traverse the capillaries of stone.

I gave myself away to the city once given to me as a gift.  It seemed obvious to give myself first to the public square.  To see what the pigeons, the light and the winds would make of me.

To Everyone & Her Resemblances,

I found her looking up, her sleep open

She might once have had a face of burlap or muslin

Eyes taught by a light which made her implausible

You prepare the space before your arrival

Conjuring is less common than cajoling

You are not weary, hungry or lonely yet your lack is adamant

Non-material scribes have rarely left your side

She stands to face you without any face

You work around her missing or obliterated features

Coldness creeps in under the prepositional threshold

Your nurselog is buried in gauze

The forest floor was made of sound

Where you stepped you fractured several sentences

First the surface powder leapt up at your approach, then the ice crackled beneath

Long diagonal fissures or gowned rings of ice are common

Other trees had obvious hats, horns, ears or expressions

A boulder covered in snow impersonates an ambitious cupcake

Devoid of instinct the temperature drops

You were too cold to photograph naked stars

Does your reticence possess a name?

How long have you known me?

When the woods turn blue you walk without waiting

The hem of your misgivings is unusually bright

A sheen along your lower mobility

Your purpose slows when studied critically

Deeper veils unfurling may only be regarded from cloaked interiors.

You stand in the center as firmness, as if you were a tree

You drop curled parchments as you disrobe

Your horizontal scripts are not transparent

Opaqueness is not an answer and yet protects your minute eyes

Your hands, if any exist, are impossible to divine

Yet I imagine one held up at the exact angle your face would tilt, if revealed

Your vertical mast is a spire, an anchor, a visible point above a city

Congregants are attached to your existence or non-existence

Your human aspect is a viable compass

Your surface is only what an observer considers froth

And yet you are a sturdy apparition

Thought forms settle in your eaves to glimpse you

You rose interminably, only once, yet never tire

If stillness is virtue, stalking

She is the quiet center which always exists

You prop her on a bookcase where you can see her

but turn her over when too much of her escapes

You came home meaning an assortment of frayed

You’ve missed her until this moment

You’ve been inside the heavy mantle

That’s why so many coats desire your company

That’s why you don’t stop going under the downpour

The coat of any animal keeps rearranging itself

You arrange her over your shoulders

When your head is bowed you are conceiving

and when you look head on everyone else

will come under your protection though

How else to conjure the image required 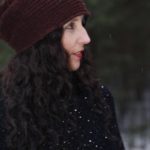 Laynie Browne is the author of twelve collections of poetry and two novels. Her most recent collections include PRACTICE, Scorpyn Odes, and Lost Parkour Ps(alms) in two editions, one in English, and another in French. She lectures at University of Pennsylvania and Swarthmore College.