Translated from the Russian by Sergey Gerasimov

Michelangelo of clouds has cloaked the whole sky since dawn,
And in the marble block of the ripening rain,
I can easily see the seeds of future Davids
Or asbestos girls with vintage umbrellas made of birds.
I walk home along Black Cat lane.
The asphalt is littered with sand.
It lies in patches, in big paw prints.
A beast of sand glass has stalked the road. It looked like a big brown lynx
On conic paws. My soul opens,
Feeling the presence of a miracle.
Three girls, one by one,
Run out from behind the corner.
They’re ordered by age from youngest to oldest.
It’s Virgo sapiens evolution scheme in pictures –
From a clumsy monkey with golden locks
To a cheeky malicious thing with brackets on her teeth.
The miracle lasts a split second,
But something radiant and bright has enough time
To squeeze its way from one world to another,
To jump from one car to another on the run –
A princess throws on a Puma jacket and hurries from
A tedious royal ball to a pirate ship The Flying September. 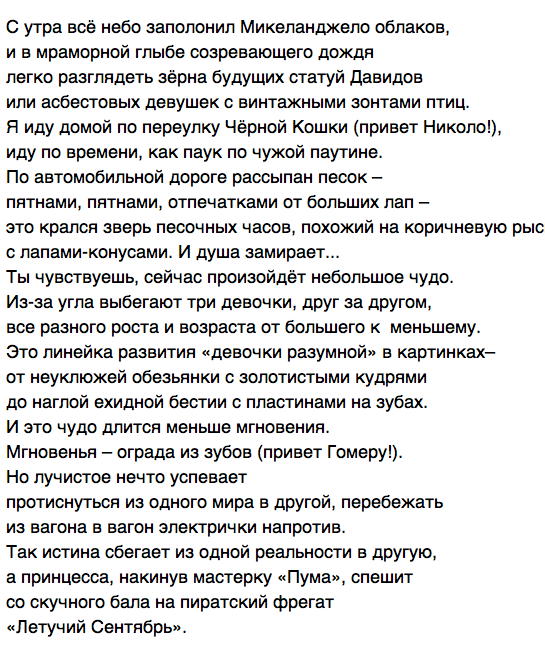 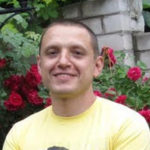 Dmitry Blizniuk is an author from the Ukraine. His most recent poems have appeared in Dream catcher, Reflections, and The Courtship of Winds. He is a finalist for 2017 Award “Open Eurasia” 2016, “The Best of Kindness 2017″(USA) He lives in Kharkive, Ukraine. 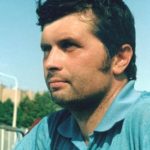 Sergey Gerasimov lives in Kharkiv, Ukraine. His stories written in English have appeared in Adbusters, Clarkesworld Magazine, Strange Horizons, Fantasy Magazine, Oceans of the Mind, and other venues. Upper Rubber Boot Books published his wildly surrealistic novel, “The Mask Game” in 2013. He is also the author of several novels and more than a hundred short stories published in Russian.