“Wouldn’t it be nice to harvest home-grown corn-on-the-cob?” the lover of nature wondered. She set out a few long rows of seeds in her backyard and waited.

One day she glanced out her kitchen window and saw corvids trooping out of the trees and strutting around in her corn plot. They pulled every corn sprout out of the soil and ate the seed.

“What next?” she threw out, desperate.

“Replant and cover it up with a cloth,” advised her neighbor, the fretful farmer. “Keep those sprouts covered until they’re a foot high!”

The cloth foiled the crows; and once the tough, crinkled leaves had pushed the cloth a foot off the ground, she uncovered them to allow the stalks to straighten up and put out tassels.

Then, when the silks showed, the fretful farmer said: “If you don’t spray now, you’ll be eating borer larvae instead of kernels.”

A few weeks on, the silks had turned brown and the cobs got big.

The farmer showed her how to gauge ripeness with a squeeze. “Wait another day or two,” he said.

Two mornings later, she went out to find all the stalks in her corn patch flattened. Ear husks were torn open, and every cob had been chomped on.

“That sneaky raccoon!” the farmer said. “He always knows when the corn is ripe.”

Horrified at the waste, the lover of nature wailed.

“Why couldn’t he just take his fill and leave the rest?”

“What? And leave all that nice corn for you?”

While the fretful farmer was talking sheep with his idealistic neighbor in the late afternoon, they noticed two black lumps moving through the just-mowed hayfield—mama porcupine and her young one.  The farmer hated this sight: He knew it would culminate in the porcupines’ deaths.

“They’re on the move. I wish they’d stay in the woods.”

“We’ll see what you think once they start gnawing on your trees.”

Over the next few days, he spied the baby porcupine in the open ground of the orchard in daylight. He went after it with his .22 pistol, but the farmer was not a very good shot and the baby waddled away. The porcupine disappeared under the board pile.

Another day a baby, perhaps the same one, was seen climbing the trunk of a maple tree, looking just like a Japanese beetle on an ear of corn. The fretful farmer raised his shotgun and fired, knocking the porcupine out of the tree and shooting a limb off in the process.

Mama porcupine was harder to track down. She was smarter, shier, and did her work on the apple trees after midnight. She dodged the farmer’s traps and snares, kept an irregular schedule, moving from tree-to-tree, but usually favoring the Tollman Sweeting because its apples were sugary even when green.

After two weeks of playing tag, and broken twigs, and chewed-off limbs, and small, green Tollmans all over the ground, the farmer finally caught up with her at one a.m. in a nearly-denuded tree on the neighbor’s property. He almost didn’t see her in the flashlight’s beam – she was as still and silent as an apple herself – but a reflection in her pinhole eye gave her away. The discharge from the farmer’s pistol pierced the August night air. The porcupine fell from the tree with a thump. He would deal with her after sunrise.

He and his neighbor took a tractor out to her tree after chore time. He got off and put on his heavy work gloves and gripped the porcupine by the tail – near the tip where it wasn’t so spiny – and lifted her from the grass. She was pretty hefty.

As she hung there above the tractor bucket, the neighbor gasped: The porcupine still had a little green apple gripped between her two claws.

The lover of nature had moved to the country after her husband’s death to experience something authentic, innocent, melancholy, the ache she felt upon hearing certain stringed instruments in the orchestra.

But the closer she got to nature, the uglier it seemed, a brawl of all against all. Even the plants in her garden seemed to be at each other’s throats all the time.

Then she saw the reclusive neighbor’s boy feeding apples to deer on the edge of her property, and she convinced herself that altruism sprouts up spontaneously from unexpected sources.

She felt buoyed up—until the night the youth returned to the forest with his father, carrying bright flashlights and rifles.

They waited for a deer to come for the apples, shot at and grazed the deer, wounding it in the eye.

The deer fled into the woods—who knew what became of it?

Then her beautiful Shepherd-Labrador mix got out one day and ran into the woods and found the animal’s remains.

She rolled in the carcass then returned to the house, immensely proud of herself.

The stench was so awful it haunted the woman’s dreams.

That night, her dog spoke right into her face: “Now, I can’t hope to catch anything unless I can maintain my anonymity, can I?” 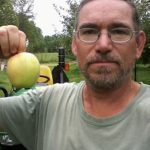 Michael Bendzela was born 1960, in Toledo, Ohio. He received his BA (1983) University of Toledo and his MA (1985) State University of New York at Binghamton. He recently returned to writing after a hiatus of 15 years and is now working on a collection of parables and fables on Darwinian themes, of which these short pieces are part. His past publications from the 1990s include: Pushcart Prize XVIII, North American Review, Chicago Review, Men On Men 7 (fiction anthology), and other small magazines and anthologies. Stonecoast Review published a piece related to the porcupine incident in the summer of 2017. He is currently adjunct instructor, University of Southern Maine. He lives with his husband and five cats on a small orchard and farm in Standish, Maine.