Other Directions but the Top

I resented the red lipstick encrusting the teacher’s thin lips, her contracted face, her bug eyes and her favorites, who could do no wrong in her opinion. She was not as old as my mother, the eldest of my forty classmates’ mothers, but was more definite and inflexible. I had no clue how to adapt myself to the expectations she clearly had but never clarified. It was hard enough with my mother.

We, the eleven to twelve-year-old pupils, called the teacher “teacher” and only used her name, Rina, to speak about her. She had been assigned as the class’s educator, which meant she had an extra hour every Friday to argue with us, and she was the responsible teacher on our school trips.

She sat on the bus in the first row beside the mother who volunteered to accompany us on the trip to the green north. The mother’s daughter, a girl with hair the color of straw and early-budding breasts, was the vice-queen to her friend the queen. I did not understand what made them royalty, so I disobeyed the vice-queen when she told me to sit beside Sarah, a girl who wasn’t a friend.

I raised my chin as I passed the queen, the vice queen, and the boys who sat all together, and picked a place beside Gili, my friend from the neighborhood. Soon, the teacher ordered everyone to sit down, and I did, bursting with excitement to hit the road. She went on to invite us to sing with the bus microphone, one at a time, but Gili and I got involved in a discussion that led to the decision to keep our sandwiches for later.

One boy hurried to the front of the bus and sang a song with gross words, until the teacher stopped him before he could finish it. After him, a girl volunteered and sang a pop song at the top of her voice, while the teacher rolled her eyes at the mother. The teacher turned around before I took my eyes off her, and asked me to come and sing next. I was flattered. I stepped to the front, took the microphone and sang a song she had taught us.

The song was about the beauty of labor work and how we’d build our country. I thought I did a good job, but in the middle of the song Sarah and her two girlfriends laughed. “Boom, boom,” Sarah said. “Hi ho, hi ho” said her friend. I made a greater effort not to miss a note or skip a word, but realized that their laughter was directed at my choice.

Outside school, those girls used high heels and wore tight shirts and pants like their mothers. My own mother wore elegant suits and shoes, and spoke six languages. Once, Sarah invited me to her home, where she showed me how she cut peppermint into a salad, and how to use her mother’s sewing machine. We became close for a month or two. Her laughter felt like a breach of trust. We still were allies.

That year, a new but undeniable hierarchy settled upon the class’s girls, closely linked to the boys’ attention. The girls whose bodies developed faster dominated the top. The queen and her vice crossed from their early royalty to the current one without a problem. Such was life. Sarah was well-developed but an extremely bad pupil, so her position wasn’t conclusive.

Though Sarah and I had drifted apart, we were on the same side and occupied a similarly uncertain space. I looked three years younger than most and was the shortest, but had friends, was outgoing, had eyes the girls admired, and did not look funny in any way that attracted attention. The boys invented names like “Elephant” and “Eiffel” for the very fat or the very tall, and the names stuck like identifying tags.

When I finished singing the patriotic song, the teacher stood up and displayed a map of the country for everyone to see. She explained how to calculate the distance to Rosh HaNikra, our destination, based on the map scale, and asked us to do it. I knew what a scale served for. My mother said I should always use a scale and look at the big picture from outside. “A scale is a tool of perspective,” I told the teacher, looking up toward the triangle of her chin.

The teacher smiled downwards through her red lipstick, sat down and spoke to the volunteering mother in a lowered tone. Sarah shouted from the back that she wanted to sing next. “Goodness. This trash is the worst,” the teacher said to the mother, not far from my own ear. My whole body tightened. I thought she referred to me, but they turned around to look at Sarah and her girlfriends. I was momentarily happy.

But the peppermint! I remembered. And the sewing machine! My fondness of Sarah returned, then disappeared because she had laughed at me. In the meantime, mistaking the teacher’s gaze for an invitation to sing, Sarah stepped forward, ready to conquer the class with her singing.

“Boom boom,” I said aloud. “Choose well or go to hell!” I intended to be mean, but she smiled with a glint in her eyes, and I had to smile back. She grasped the mike with the confidence of a star and took such a deep breath, her protruding breasts seemed larger. The bus was her battlefield. Her song would be good.

The teacher leaned backwards, exhausted. I needed to find my place. 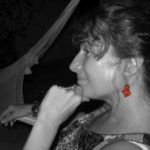 The prize-winning work of Avital Gad-Cykman, the author of the 2014 flash collection Life In, Life Out (Matter Press), has appeared in magazines and anthologies such as Prairie Schooner,  McSweeney’s Quarterly Concern, Michigan Review, Ambit, Glimmer Train,and W.W. Norton’s International Flash Fiction Anthology. Her work in Hebrew has been published by Iton 77, Alaxon and Hamusach. She was born and raised in Israel and lives in Brazil.