“My friend like you!” Buttercup-blond calls to me in German-accented English. She points to a guy in the ankle-length thawb and turban-wrapped alqaweq of a traditional Yemeni. Skin like caramel. Stare like black wine.

“You join viss us dinner?” she asks.

Now that I’m celibate, trying to stay sober and a half-planet from the romantic pileup I’m blaming for my broken heart and the revulsion that fills me at the thought of intimacy, whoa do I crave spicy food.

“You two are together?” I ask.

Okay, weird. And her accent reminds me of my grandparents’. Which makes me wonder what her grandparents were doing in Germany during the Holocaust. Because I know what happened to mine.

But I didn’t come here to fight.

I’m on a pilgrimage to “I Don’t Give a Fuck” in the Land of “Meh.” My own personal version of what the Buddhists call “non-attachment,” the Stoics call “apatheia,” the Hindus call “vairagya.”  No more craving. No more pain.

So far I’ve made it to this hostel beside the tiny town of Mitzpe Ramon in the Negev Desert, in Israel. Huffs of hot dry air like when you open the door of an oven. Vastness of barren brown with an occasional Acacia and thick-stemmed, spiny plants. Wind that beats against the hardened mud huts, stick lean-tos, wizened gray-wood platforms for tents, metal poles with hooks to hang hammocks. All at the edge of the Ramon Makhtesh. Makhtesh is the Hebrew word for a crater that’s been hollowed by wind, rather than by a meteor’s impact or a volcanic eruption. The Ramon Makhtesh is the largest on earth.

“Sure, thanks, danke. Your food looks really good. What should I bring?”

I’d been on my way to Mitzpe Ramon’s squat row of storefronts (which looked like they’d been made out of concrete Legos) because I’d run out of food, but there was an emergency vodka stashed in my mud hut. Because, well, maybe I wasn’t actually trying all that hard to stay sober.

The red and yellow sedimentary layers in the steeply-descending rock walls, like memories, melt into shadow. A hawk soars above. The wind never stops. I hear fragments of Danish, Arabic, Spanish, Hebrew, English and what might be Ukrainian or Russian from others at this hostel. Someone plays rhythm and blues on a harmonica. Chirps from a desert lark. Hundreds of millions of birds, countless species, fly through Israel on migrations to and from Africa, Asia, Europe and beyond. Humans have been migrating through for millennia, too. This area used to be on an ancient Spice and Incense Route. Seven thousand years ago Neolithic tribes traded sea shells, obsidian, salt. Three thousand years ago Macedonians, Egyptians and others traded frankincense, myrrh, ebony, feathers, silk. And they probably all traded slaves.

I reach my mud hut. Streams of colored light from the glass bottles set into its walls. Slab of foam on a ledge that serves as a bed.

I remove the vodka from its cushioned compartment in my backpack.

When I return, Buttercup and the Yemeni are sitting on rocks and staring into their fire. I offer Buttercup my Finlandia. She motions to her guava schnapps and some paper cups. “You make ze drinks?” she asks.

I pour vodka. I pour schnapps. I hand out full cups.

The Yemeni pulls an aluminum foil-package off a rock lapped by flame. Crackling as it opens. Steam rising from the malawach inside, a Yemenite bread. He puts malawach on each of three plates, then he pours lentil stew.

Soft malawach and incendiary stew. Starchy nothingness of vodka. Gummy super-sweet guava. Each extreme etched sharper because of the other. Black yin with a dot of white. White yang with a dot of black.

Buttercup strokes her fingers through her shoulder-length hair. Her expression seems thoughtful. She motions for me to refill our cups.

Again we stare at the fire. Kind of like campsite TV. The ancient nomads, traders, servants and slaves here before us probably did the same thing. Human life like wind-frazzled smoke. Sparks that fizzle out when they reach cooler air.

Some guys with obsidian Mohawks and skin the same caramel tone as the Yemeni and me, maybe their roots are in Morocco or their ancestors were Egyptian, could be from anywhere, approach. One holds out a platter. “We trade?” he asks in Hebrew-accented English. They trade us their extra lamb kabobs — greasy burnt-edged deliciousness touched with cinnamon, coriander, cumin and nutmeg — for what’s left of our stew, malawach and vodka guava schnapps.

Yay for alcohol, The Universal Solvent.

So much wind. So many visible stars. Such a depthless night sky.

The guys set up a portable speaker. Which pumps out a bass beat and the blend of European, North African and Arabic music known as Mizrachi.

I shiver. Even in summer, desert nights can be cold.

The Moroccans are gone.

I’m still feeling too much.

I try to pour another vodka guava schnapps although both bottles are empty.

She goes into their tent. Returns with a mini-hookah. Fusses for a while with the bowl and the snaky hose and the shish.

Her man gets the first inhale. She sucks in the second. The bubbling-filled glassware comes to me, warming my palms.

I take that first hit. Rush of vapor. Harsh earthiness that coats the inside of my mouth and burns toward my throat. Static-y chemical-y version of bliss.

Is it Tuesday yet? Tracy Schorn, author of Leave a Cheater, Gain a Life, says people usually get to Meh on a Tuesday.

Someone passing says, “Hippies always have the best weed.

I do not remember going into their tent.

But my next awareness is that I’m inside.

They move toward each other. Their lips touch.

Should I leave? It’s difficult discerning the social niceties when you’re high as fuck.

The Yemeni’s hand slips under Buttercup’s hoodie. He gropes her.

“Vait!” She shrugs out of her hoodie, strips off her tee, unhooks her bra. Huge creamy breasts.

Wind blasts outside the tent.

Yeah, it’s probably time to go. I just need to remember how to stand up.

“Him sinks you beautiful,” Buttercup says between kisses. His torso surges down against hers, pushing her down her till she’s flat on her back.

The Yemeni pulls down her thong.

She opens her legs.

“Her hand reaches for mine. Heat in her skin. Fear inside mine.

How long has it been? A year?

Swoop of cloth and the Yemeni’s out of his thawb. Firm, slight-muscled skin. He unwinds his turban. Removes his alqaweq.

He stands. Buttercup reaches to pull down his boxers. They urge back into each other’s embrace. Rock side-by-side as though in some kind of cradle. Pressing together so close. His legs between hers. Then they break apart for a moment.

“Him vant kiss you too,” she says.

The Yemeni has round butt cheeks. His cock is a stout, circumcised, burgundy shaft. Buttercup is a cornucopia spilling softness.

No condom. A lot of people in the Mideast don’t even wear seat belts.

She moans as he enters her.

I try to stand up. This time I succeed.

Buttercup insists the Yemeni walk me back to my hut.

We pass zippered-closed tents, people asleep in their hammocks.

The moon seems lit from within.

Maybe after this I’ll find my way to India. Search for the fig tree under which the Gautama Buddha sat until he found Enlightenment.

We arrive at my hut.

“Please, one kiss,” the Yemeni says.

“Ani ohevet,” he adds in a desperate voice. Hebrew for “I love you.”

But I’m like the molten lava transformed over eons into a black basalt hill and scatter of rocks within the wind-carved void that is the Ramon Makhtesh.

At the bottom of the makhtesh, a small natural spring supplies life-giving water to the ibex, hyenas and gazelles of this region that gets near-zero rain. The rocks there have been carbon dated to two hundred million years old. There’re ammonite fossils and micro-diamonds embedded in sandstone.

I know the makhtesh, glorious as it is, is just an enormous, heart-shaped, emptiness.

I just hope it isn’t a mirage. 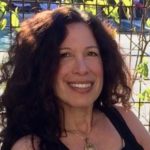