Oza wore her red jacket. She followed the trail her eyes made of the jumbled rocks and loose scree to the wall of the mother mountain.

Reaching the rock face, she changed out of her hiking boots and into soft soles. The face was deeply fissured and Oza only looked briefly to see the upward paths. She had climbed here before. On this small mountain, there were many routes upward. She dusted her fingers with chalk and began to rise.

Oza did not need rope or anchors. This climb was between Oza and the mountain. She wiggled her toes, stepped up. Up, sideways along this crack, to that next step up, up again. Hands hold and one foot dangles. Foot stretches for its next place. Easy.

Step, step, see and climb. The world made small, just this small piece of rock face, eyes and mind only on the next move. The rocks are only what they are. The mountain quiets all voices.

Oza climbed. She pulled herself up the wall of stone.

On the climb, there were no outside voices. No voices saying “Frankly, we think you are unsuited for a more advanced position with the company.”

No “As your doctor I tell you again, alcohol and these medications do not mix.”

No “Ma’am, if you don’t stop shouting we’re going to have to ask you to leave.”

Oza climbed past bolts left pounded in the cliff. She stepped on one or two on her way up. This was a popular place to climb, but she was here on a cool spring day before many tourists arrived.

On a climb, there were no inside voices asking “how can I keep living here if I can’t find a roommate?”

No “If I quit my job, will I find something better?”

No “If I wanted to, I could out tramp her any day.”

No “Thank goodness for nice first responders trained to deal with mental breakdowns. Some are quite fit. I wonder if any of them go rock climbing?”

Two-thirds of the way up, star-fished across four points of contact, Oza got a stitch in her side.

She winced, and cautiously took one hand off the mountain to rub at the spasm. She waited. In the woods below, a truck pulled into the trail head parking lot, people getting out. A flock of migrating geese passed above.

On a climb, there was no dark worm voice. There was a worm inside her. It wanted to use Oza to destroy others, and if she would not help the worm, then it threatened to eat her, from the inside. The worm never spoke on the rock. Oza felt safest, though a little winded, clinging to the side of a 400-foot-high cliff.

The stitch eased, and Oza climbed again. She slowed herself down, not wanting another cramp. She was nearing the top.

There was a small overhanging ledge protruding out just under the peak. It only stuck out a foot and a half at most, but a free climber had to lean backwards out from the rock face to reach around it.

“Look,” one of the people below said, pointing up at the climber, in the red wind breaker. “She looks like a flame. A flame moving up the mountainside.”

She reached the familiar seam below the ledge. There were many old anchors and bolts here, some rusting in place. The overhang was waiting.

Oza shuffled sideways to a bolt cluster, put her toes in the seam and her heels on two bolts, in a partial crouch. Breathing deeply, Oza counted down from ten. On zero, she lifted one hand off the mountain and reached behind and up, to the ledge.

Her knuckles smacked into the ledge’s underside. She brushed her fingers back along its length, body rotating outwards. Fingers found the edge. They crawled over the edge to the other side. Arm bending awkwardly, her searching hand found a sizeable knob. She grasped it. Yanked on it. It did not move. Oza hesitated and took another breath. She let go with her other hand, pushed off with her feet as she brought her second hand up and over to the knob.

The bolt under her right foot broke.

Her second hand reached the ledge as the other foot slipped away.

Oza dangled, her body swinging out.

Oza thought about the worm.

The knob she clung to sight unseen held.

Down below, the watchers squinted.

Oza swung her lower body back towards the mountain. Her feet scrabbled for something to stick to as her arms pulled.

Oza pulled herself up. It hurt. She kept pulling.

She pulled her shoulders up and hunched over the ledge. Her arms trembled.

She hauled herself past and over onto the ledge, ledge giving over to the gentle mound above that was the peak. When her belly scraped over the ledge, tearing her jacket, she knew she would not fall today. She pulled her hips over, and lay still on the top of the mountain a moment. Then she drew hers legs in and counted up to ten.

The sun was bright and she was covered in sweat. And for now, at least, everything inside her was quiet. 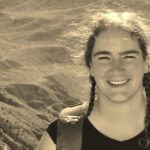 Kilmeny MacMichael currently lives in western Canada’s Okanagan Valley, where she writes flash and short fiction. She has been previously published online by Watershed Review.