Your IV nurse is missing one front tooth, and you don’t know on what but you know that she’s high. You can read every sign like it’s lettered in red because you got sober two months ago, and then again last week. She says you’re hilarious, busts two of your veins, tapes up your hand in a tangled mess. When you unwrap it tonight you know you’ll find skin all purple and mottled. You wish you could tell her you hope she’s ok.

This only takes two hours but time passes slow here. You feel the medication ooze. Your arm is cold. You finish your book. They keep asking if they can get you anything. You’d like sex and a decent coffee. You ask for the coffee and it comes in a styrofoam cup. You’ve repeated your date of birth enough times now that it’s just a string of numbers. Sometimes it takes you a minute to remember.

This makes you think of the last man you let yourself love for five minutes, of how he could see this made you strong instead of fragile, of how he was different: of his eyes dark and sweet, of how he’d bet you could handle yourself in a fist-fight, of how he’d say I missed you and his touch felt like he meant it. But he still stopped picking up the phone one day, no clue of where the hell he went.

Your mother tells you this keeps happening because you scare men, suggests you can fix it by wearing less flannel, so you buy more. You don’t talk to your friend Eliza anymore but you always think about what she said two years ago, that going dancing one night is an antidepressant for two days, so you lace up your shoes and keep trying it, and you keep taking strangers to your bedroom and you keep kicking them out, because you’ve survived a lot of things you said you couldn’t but if you get raped one more time you really don’t know what the fuck you’ll do.

On the drive home from the hospital, the winter sun’s already low enough in the sky to crack with a baseball bat. You listen to the same three albums you’ve been playing on repeat for weeks, and that’s not strange for you but these are angry albums full of angry words. You’re trying to make yourself want to spite someone. You’re fumbling around in the dark of your head. You’re looking for a fuse to ignite.

It probably means something that yesterday a social worker made you promise you won’t kill yourself before next week. You said,

Suicide’s not really my thing.

Of course not, you’re still here.

And he laughed, but he knows you, so he made you repeat the words, I promise, Jim, and then you laughed too, but tonight you keep your car on the road, and you curse his name, because that shit really works. 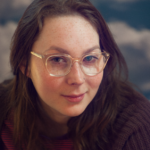 Annie C. Faber is a fiction writer and poet studying at the University of Michigan, Ann Arbor. Her work is heavily influenced by the autobiographical, drawing on topics of chronic illness, sexuality, and love in a physical body that can be as much a challenge to inhabit as it can to understand. Her work also appears in The Esthetic Apostle.