Below subatomic, the particles
slip through Heisenberg’s uncertainty nets.
They cannot even be called articles;
they’re just mathematical epithets.

Though we may say they have up or down spins
(we may even find them charming or strange),
like angels that dance on the heads of pins,
it takes metaphysics to find their range.

They have no shape we can define, except
as bleary fields of energy.  Until
we measure them, there’s no place where they’re kept;
their locus is totally vibratile.

They pluck at space like an instrument string,
at this scale.  Quark!   The hadron angels sing! 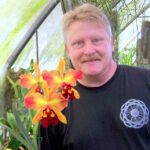 James Ph. Kotsybar, chosen for NASA’s special recognition, is the first poet published to another planet, aboard NASA’s MAVEN spacecraft. His poetry appears in Hubble Space Telescope’s mission log and was awarded and featured at NASA’s Centaur’s 50th Anniversary Art Challenge. Invited by the President of the European Academy of Sciences Arts and Letters in 2018, he performed his poetry before an international audience of scientists and Troubadours (Europe’s oldest poetic institution) in their founding city of Toulouse, France, at the EuroScience Open Forum, earning a standing return invitation.