The Problem of a Letter

The problem of a letter, or the rudiment of winter?

(What is more like time in the wind in the letter?)

In winter it should be: the beam unveils. Not glass. Ground
in the guise of ground

never to languish, in the letter read as one.

That north-east winter remained. Winter in the form
———-of winter,

the winter, in due course, prevails. Has this not been
———-written? Will no one

spare the time? The glass observes a “requisite stillness.”

Some trees, no less, in forms of trees, yet bound

in these exposures, answer that “you are no less
exposed in this world to be,” papered over, and
following

As you are revealed, the branch will follow. Part fable, part
logic of the tree. “Any stand of pine, settled upon the body –

yet, when perched atop the frame, what kind of shoulder
is the ruin?

Measure, yes, even unto sun, the sort of thing a gradual
approach resolves,

what rose pending when none, but none, extended.

Leaves fall aground. We see more, and more. Some letters
would have otherwise been written,

and some winters would have hailed the unknown. Affix
the time integral to form; i.e. my ship was lost at four o’clock.
The name is but the guest of the occasion. As the wind flew
aft across the east, just abaft the beam.

Wood, in the brightening sun. The leaves, crushed
underfoot, maintain

the subject missing was an assemblage of time. Years
before illumination swings the timbers’ white noise
on nearby prospects.

To imagine I’d speak without the index. To be here, to extract letters in the eventuality of repetition. One to note the style, fixed by its traces, another to curve, and another set parallel along the plane. The letters ply the visible, but some must face the line to afford their intervals.

Roses, you see, not knowing the words. Although a remote pair, a rose sat in the road.
Enlarged, the truth is the sum of green and yellow. Nothing in the voice is only pending.

The wound outlasts the pose. The wind outlasts the wound. I’m speaking, where the comma should be, and to exfoliate the measure, no more numerous than vacant leaves in the anonymous quatrain.

Now, a shadow will make no further acquaintance; the shadow of bodies is the science
of which the angle is just a mark. “Red” is an attributive which cannot stand as subject.

“Primrose” was still more a formality than all the other impressions of the species, which made clear the question of whether a rose remained in the prismatic imperfections of the forgotten.

The paper still may be; the scene will be “as yet to be,” and then to be augured, hued under the same incendiary finger, no stranger to the moment that creates the things it does not, accordingly create.

One would at least want to believe, in reliving the event – a contrary fate of reading and thereby missing fate. A rabbit is asymmetrical. “Chance” translates to “silk,” “prone” to “sun’s saturated metaphysic.”

Our yellows had returned us to those who, in the manner of a rose, we had long been missing.
The rose-yellow jar would have to assume resemblance. The roses all turned yellow, alarmed
that the yellow rose was missing. 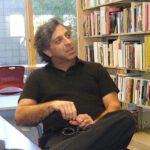 Steven Salmoni’s recent publications include A Day of Glass and the chapbook Landscape, With Green Mangoes, both from Chax Press, and poems in The Experiment Will Not Bound, Mid-American Review, NOON and Interim. He is currently Department Chair of English at Pima Community College, in Tucson, AZ. He also serves on the Board of Directors for POG, a Tucson-based literary and arts organization.