We’re sending our father his Christmas box—
first and second-grade pictures,
a blue-gray flannel shirt, fleece-lined slippers, stinky cheese—
It’s cold in Korea, our mother tells us, and he misses
food from home. We blow kisses in the box,
wrap it with twine,
seal each seam with melted wax,
and off it goes to his APO.

———Next, it’s time for ironing.
We press handkerchiefs at our own small boards
as she deftly noses her iron into the gathers of skirts,
smooths out collars and lapels,
lines up pleats, holds them firm, and slicks the steam in.

And as we follow our father
from Pennsylvania to Japan, from Japan
to California, we while away the work
with “Let’s Describe” or “Movie Stars”—
Let’s describe a ballgown, let’s describe
a beach cabana—Can you name three
movie actresses whose last names start with C?

———Now, as the wind rises
and temperatures head downward once again,
I smooth and press the lace-edged cutwork napkins
she used when she hosted Army wives.
And I recall the chapel, my navy-blue wool dress,
my fear to touch his face.
One chrysanthemum petal had fallen on his hand.
Softly, our mother told the undertaker,
Let me fix his hair.
He never wore it parted quite so high. 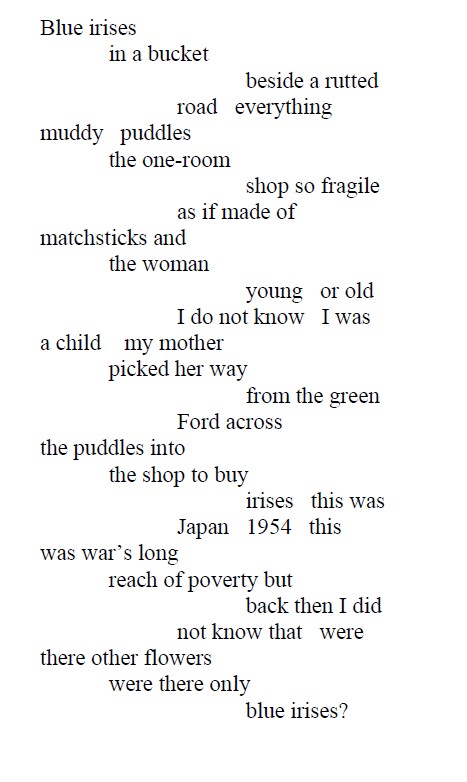 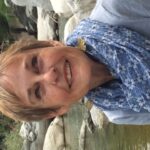 Ann Fisher-Wirth’s sixth book of poems is The Bones of Winter Birds. Mississippi, her fifth, is a poetry/photography collaboration with Maude Schuyler Clay. With Laura-Gray Street, Ann coedited The Ecopoetry Anthology. A senior fellow of The Black Earth Institute, she has had numerous residencies as well as Fulbrights to Switzerland and Sweden. She is Professor of English directs the Environmental Studies program at the University of Mississippi.