It has been twelve years since the publication of the anthology Black Nature: Four Centuries of African American Nature Poetry (University of Georgia Press). To celebrate the book’s Bat Mitzvah, The Ilanot Review is interviewing the anthology’s editor, Camille T. Dungy.

Marcela Sulak, managing editor of The Ilanot Review, sent these questions to Camille T. Dungy, who then responded.

Marcela Sulak: You saw Black Nature as the first anthology of its kind, since it would seem that people don’t “think of Black poets as writing in a genre that brings to mind having the leisure—and time—to contemplate a field of flowers.” You also note that, with the history of African Americans in this country inextricable from slavery, African American poets tend to note nature’s harshness, whereas white writers notice its beauty.  How has this anthology rethought the genre of nature poetry? And/or the genre of Blackness? (I’m using “genre” here loosely—and I hope not flippantly.)

Camille T. Dungy: It’s not just that I “saw” this as the first anthology of its kind. It’s that a comprehensive lit review proved that Black writers had been excluded from the canon of environmental poetry that existed at the time I compiled the collection. I spent months in two of the top libraries in the U.S. looking at nature poetry anthologies and many of the key environmental journals published up to 2005, and I found 6 poems by 5 Black poets. In all the literature. This made no sense to me. My personal computer file of poems I admire had at least 45 poems that could easily be categorized as nature or environmental poetry. Why the discrepancy? That enormous lacuna was what Black Nature addressed. So, you quote my introduction and some of my thinking about why this big omission happened/happens. There are a lot of other reasons too. For one thing, people don’t see what they aren’t looking for. As I gathered poems for the collection, one of the common responses from writers was, “Thank you. I’ve been doing this work all my life, but no one has ever seen me in this light before.” That was a frustrating AND rewarding thing to hear. I am not sure I could have collected Black Nature as easily today as I did when the book came to fruition. There are significantly more writers of color in the conversation around environmental entanglement and all that’s connected with that idea. As Ecopoetics has risen to prominence, a way of thinking about nature writing that doesn’t depend on the sublime and pristine, and that consciously and actively engages with issues of the anthropocene, there is a more fluid understanding of the ways that history, economics, politics, culture, and society reveal the realities of both the human and greater-than-human world. Therefore, poets who engage with questions of history, class, race/ethnicity, economics, social justice and more are far more likely to be understood also to be writing about “nature.” When I collected Black Nature, such a capacious perspective was only just beginning to be normative, and so many of the poets in the collection had been overlooked because their work was consigned to one of the other subcategories, as if talking about history meant you couldn’t also be talking about the environment (as an example).

MS: What inspired you to create this anthology?  And how has this book fulfilled (and surpassed) your expectations over the past twelve years? Was there anything that surprised you?

CTD: I got tired of people being surprised to see a Black poet talk about nature when I read my own work in public. As I said, I saw this happening in so many of the poets whose work I admired. A few examples include: Lucille Clifton, Yusef Komunyakaa, Evie Shockley, Ed Roberson, Major Jackson, Marilyn Nelson, June Jordan, Jay Wright and Jayne Cortez (I am still sad I was not able to attain permission to include the latter two’s work in the book). I saw this complicated and exciting interplay between the human experience (in all its many-faceted possibilities) and the greater-than-human world in so much Black American poetry, and it became imperative to me to share this vision. I contracted this book in Spring of 2006 and we published it in December 2009. That is an extraordinarily rapid time frame for a book of this size. But in a way, the book was easy to put together because the poems had been waiting to be called on to speak in this way. The clarity and speed that accompanied the process of compiling this collection remains one of my most fulfilling writing/editing experiences. It’s not that it was effortless. It’s simply that the imperative of the work made it so that the path was clear from start to finish. That the book continues to feed so many readers speaks to its continued role in opening the conversation to more, necessary, literary voices. As I have said elsewhere, until you allow more people into the conversation, it’s not a conversation, it’s a monologue. We’re at the brink of irreversible environmental catastrophe. We need a deep, broad, renewed conversation urgently if we expect any real change to happen in this world.

CTD: I alluded to this above, but there are about six poets from whom I was unable to gain permission to include their work for a variety of reasons. I still wish I’d been able to have them in the book. As to poets who have come to my attention since the book’s publication… I did start the collection thinking this would be the definitive collection. Like a capstone. But very soon I realized it is, in fact, a cornerstone. I understood from very early in the process that there would always be new writers doing this work. That was, in fact, part of the whole point. I wanted to empower new writers, current and future writers, to see themselves in the canon. And, also, to be willing to write themselves into the canon if some key part of their identity had been actively erased, as had been the case for the environmental poetry of Black Americans. To reframe the walls of the canon. More! More! More! That’s my motto. I am always thrilled to learn about new voices who can be added to this urgent conversation.

MS: How has the publication of this anthology affected the way you see the natural world? How has it affected your own writing/teaching practice?

CTD: Hmm. This is an interesting question to me. I think that I published Black Nature because I didn’t see the way I saw the world reflected in the conversation. So rather than changing the way I saw the world, I set about to change the conversation. Isn’t that something that artists are always doing? Rather than shifting our own perspective, we ask those who view our work to shift theirs. And by shifting, to grow and expand. That said, I believe that the publication of Black Nature and its subsequent and ongoing (generally) positive reception, has provided spaces for me that might not have existed. Some of those people who told me they had been writing this way their whole lives had never been invited to some of these spaces before the publication of Black Nature. I extrapolate from this that I might not have been invited into such spaces either. I am proud of the ways that Black Nature and my work on and around that anthology has helped to make a more inclusive space for so many writers in the world of poetry in general and environmental poetry specifically. Perhaps Black Nature truly is a Mitzvah. Doing necessary work in the world and, by such means, being and granting a blessing. I’m grateful to the book for what it has offered me, and continues to offer.

MS: That makes a lot of sense, and I like how you’ve shown me that my question was backwards. Thank you so much for taking the time to respond to me, Camille. Thank you for this wonderful anthology, and mazel tov! 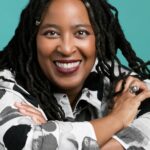 Camille T. Dungy is the author of Guidebook to Relative Strangers: Journeys into Race, Motherhood and History and four collections of poetry, most recently Trophic Cascade. She has edited anthologies including Black Nature: Four Centuries of African American Nature Poetry. Her honors include NEA Fellowships in poetry and prose, an Academy of American Poets Fellowship, an American Book Award, and a Guggenheim Fellowship.