The Sea Apprenticed the Woman in Me

Alone in a candlelit hut by the sea my mother birthed me. The forceful expulsion of fluid muffled her screams.

Cradled and suckling I grew, until my small body toddled then ran, until sturdy and strong I could feast on mussels and fish, crab and dulse. We lived, I believed, in a paradise. Until nitpicking picnickers spat, regarding our hut with disdain. Then a snotty boy with amber curls and a blistered nose gestured across the dunes, pointing. “Look at that weird, wild woman,” he cackled. My mother kicked the surf with abandon, gathered her daisy-print skirt above her knees, tangled bleached ringlets flying kite-like behind. “She’s splashing about like a child.”

He was most certainly wrong. “You know nothing about play in the ocean,” I said. “Children don’t splash in that manner. We bend, palm the water, spin a windmill of joy, offer holy brine to the sun and the sky. Look closer,” I turned his narrow shoulders. “All mothers tie their movements in invisible knots, kicking at waves only with ankles and feet, half joyous dance, part furious fervor.” He scowled and left.

And she was right. The sea apprenticed me in her ways, and the rhythms of water, the turn of her tides, the swish of her hips. I copied and followed, veered into and swallowed the foam, the raging white spray, and the sweet mother’s milk from the sea’s teat.

Constant as breakers and waves, I played that rhyme, striking the notes of her song, pink budding first, then maturing in peach, preparing to nurture. And over these years despite occasional junctures of calm, I never knew silence, not really, not once. Just relentless wind, rasping sea grasses, and keening gulls.

Until lying on the shore one cool but bright night.

An earthy young man — rippled, muscled, tender, and dark — gently caressed my breasts as the sea sucked harsh gravel into her mouth, chewing, and spitting it out. At the very crest of our pulsing together, the moon and stars clouded, and Mother extinguished the hut’s single candle, and magically the sea hushed, hushed just for me. 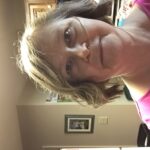 Angela Joynes is a disabled Canadian writer now living in Tennessee. She holds a BA, MD, and a Certificate in Creative Writing from Middle Tennessee State University. She has previously published in Flash Fiction Magazine, Fleas On The Dog, and Shift.