Because his father’s sequestered himself in bed
and the night’s still warm, the mother takes her boy
outside to rock on the porch and watch the clouds
hobble toward them on lightning’s bright stilts.

Because he wants to know how far away
the sudden fury is, he counts out loud
the seconds between the flash and hoarse
thunder that shakes the house. Ten seconds.

Two miles this time. He learned the trick
in school—earth science, the best time
of the day when the teacher talks rocks
and clouds for an hour and never

has to tell him to keep still because
he doesn’t want to miss the turning
of God’s waterwheel or forget the
fissures riddled through earth’s skin.

Because the lightning flashed again
and the thunder hardly waited two seconds,
he asks her if the house is safe. The mother
sees the rain approach, draping itself across

the neighbor’s house like a cold rag over a bruise,
and pretends she doesn’t hear. When he asks again,
she says she doesn’t know because she doesn’t,
can’t predict the way the clouds behave, and while he tries

to tell her all he knows about the positive and negative
charges, the relief of those charges as light and heat,
how the teacher said lie low if you’re caught in a storm,
she grips the skeletal arms of her rocker. The scrim 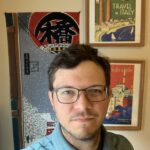 Joshua Jones received his MFA from UMass Boston and is a Ph.D. candidate at the University of North Texas. His poems and essays have appeared in Image, Southwest Review, and Salamander among other journals. He and his wife wrangle dachshunds in Frisco, TX.